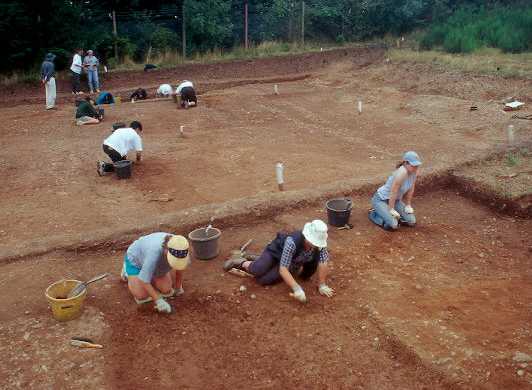 The Lunt, a fort that was rebuilt several times throughout the Roman period. A section of the defences, the barracks and a granary have been found from the earliest phase of fort during archaeological excavations. The Roman fort is situated north of Coventry Road, Baginton.

1 `The Lunt’ is an almost vertical wooded escarpment above the River Sowe. An ideal location for a Roman fort. In 1960-1 an excavation on the E and W slopes located defensive ditches and part of the interior of the fort was excavated. In 1966 an excavation was undertaken with the intention of restoring the fort and opening it to the public. Occupation belongs to the late Neronian – early Flavian period (cAD 60-79). Evidence was found for two distinct periods (see PRN 5297 for Phase 2). In 1967 a trench was opened immediately behind the E rampart and other slip trenches were excavated to locate the defences. A long narrow timber building with a porch (?) and a rock-cut water tank was uncovered together with beam-slots. Finds included coins, Samian, coarse pottery and military bronzes.
2 Further excavations 1968-71. A number of distinct phases within period 1 (cAD 60-64) were distinguished. In each phase `barrack-like’ buildings existed. The Period 1 fort was larger than its successor and the defences have not yet been located, but it evidently enclosed a larger area than the Period 2 fort. On the E side the rampart was possibly turf without a ditch. In addition to barrack-blocks a granary was located at the NE corner of the fort.
3 Further excavations after 1971 produced further detailed evidence on the structure of the fort.
10 Lunt fort western defences examined 1983. Ditch of period III and buildings sequence of periods I+III investigated.
11 Noted in Britannia (1985).
12 Excavations in 1997 revealed two post holes. Deposits probably representing a demolished or collapsed wall. An ephemeral curvi-linear feature and sub-triangular pit were also found.
13 Excavations between 1988 and 1991 in the NW part of the fort found considerable plough disturbance of Roman deposits. However, observations in a sewer trench in 1991 produced the first possible evidence of Period I defences in the form of the bottom of a ditch and a layer of decayed turf. Remains of agricultural buildings possibly associated with Period I were also discovered in the excavations.
14 Excavations of Period 1 Western Defences in 1999 revealed the remains of what may have been a kiln.
15 General article from Current Archaeology.
16 General article from Current Archaeology.
17 Excavations on the Western defences 1998. Showed medieval activity as well as Romano-British.
18Report on work 2001.
19 Scheduling revision.
20 Scheduling record from 1978 showing the extended area of the monument.
21 Letter relating to an application to reconstruct part of the ramparts.
22 Letter from EH about methodology.
23 Excavation report from 1989.
24 Fax from 1998.
25 Communication from EH.
26 Letter relating to application for further excavation.
27 Correspondence from the University of British Columbia about the on-going work.