You are here: Home>Locations>Warwick>Site of Anglo Saxon Cemetery at Longbridge 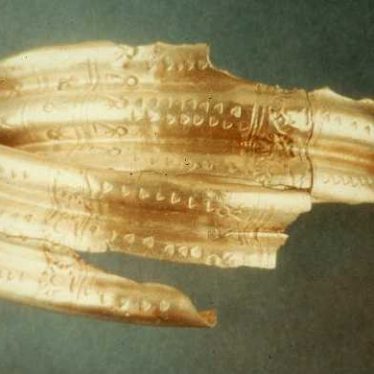 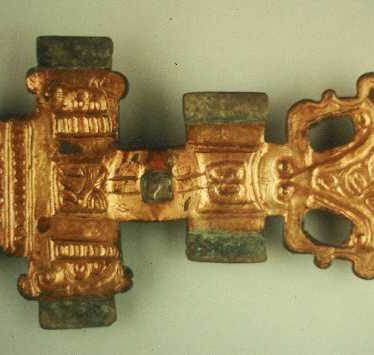 An Anglo Saxon cruciform brooch found during excavations at a cemetery site near Longbridge, Warwick
Warwickshire County Council
Description of this historic site

The site of an Anglo Saxon cemetery dating to the Migration period which was discovered in 1872. Many finds including brooches, amber beads, a sword and shield bosses were found with the human remains. It was located 500m west of Leafield Bridge.

1 1875: Two workmen digging for gravel found several skeletons and Anglo Saxon weapons. Burgess watched the progress and noted that the graves were 0.8m deep, not more than 0.3m into gravel, and that some skeletons were laid indiscriminately on others. One grave was of a young man over 1.8m tall, another of a woman with a gold bracteate, a large cruciform brooch, a few amber beads and a silver bracelet. The grave next to this contained a bucket and two saucer brooches. Other finds included a glass vessel, a pot, two buckets, a sword, a spearhead, several javelin heads, knives, at least six shield-bosses, seven saucer brooches, two flat ring brooches, two small-long brooches, a strip of gilt bronze, a key, and belt buckles. The excavation covered an area 15m by 18m and other graves may have been left undisturbed.
2 The supposed site of the cemetery was examined before redevelopment, but nothing was found and its exact position remains uncertain.
3 Descriptive text.
4 OS card.
5 Correspondence from 1949 about the Myton brooch.
6 Letter from 1949 to Birmingham University.
7 Letter from 1960.
8 Correspondence from 1968.
9 Annotated map of the site showing areas of archaeological work.
10 Note of material held by the British Museum.
11 Plan.
12 Engineers’ plans from 1967.