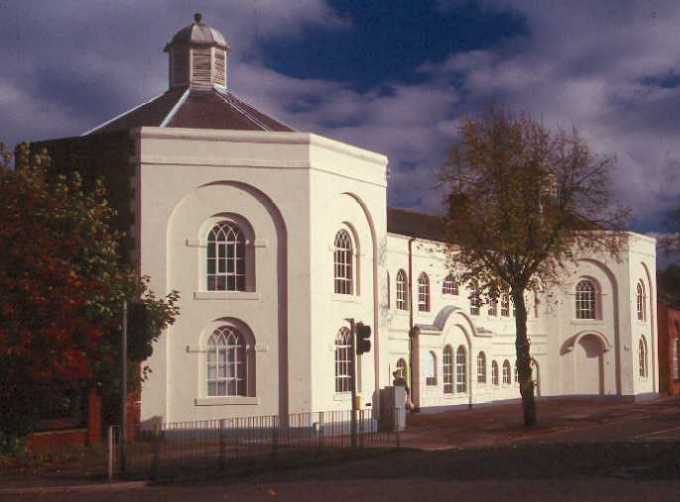 Warwick Gasworks in Saltisford, built in 1822, where gas was manufactured during the Imperial period. The building is one of the oldest and best preserved gasworks in the world. The central block has wings flanked by octagons containing the gasometers.

1 The Warwick Gas Works was built in 1822 near the basin, obtaining its raw materials from the coal wharves established at the waterside. By 1851 the gasworks comprised a one-storied central block with two-storeyed wings flanked by two octagonal gasometers. The gasometers, evidently dating from 1822, are treated architecturally as brick buildings. The central block contained the office, valve-house, and ‘loder’ and gave access to a court in which stood a large retort. As rail superseded water for the transportation of coal a tramway joined the gasworks.
2 Now occupied by Lawrence Gould, Rural Building Consultant.
3 One of the oldest and best preserved gasworks in the world, being the notable surviving example of the pattern used on many sites, with twin octagonal towers flanking the entrances and offices, with the retort house to the rear.
4 Outline of the history of the gasworks and of the use of coal gas for lighting, with two photographs.
5 A building survey of the street frontage buildings of the former gasworks identified six major phases of building work. The initial phase included the two octagonal gasometer buildings and what may have been elements of the original central gateway. The gasometer buildings were constructed of hand-made bricks with all subsequent work being in machine-made bricks. In Phase 2 wings running on either side of the central gateway were developed (by at least 1847), along with a rear courtyard. In Phase 3 (1847-51) only minor changes were made and early in Phase 4 (1851-87) the gasometers were out of use. Early in Phase 5 (1887-1976) the central gateway had been blocked by a single-storied structure and the two gasometer buildings were thus linked by a continuous structure. The gasworks themselves closed in 1953. Little further major development took place until the central singe-storied structure was raised to two stories in the 1970s (Phase 6) and the whole of the frontage re-fenestrated to give a unified appearance. During the later 20th century the interior was partitioned off into rooms and corridors by stud walling.
6 Evaluation carried out ahead of redevelopment. This located the possible remains of the 1822 retort house, and various structures related to the late 19th/early 20th century retort house, gasometers and associated buildings. All of the structures revealed were located just beneath the present tarmac yard surface and were in a state of good preservation.
7 Further archaeological fieldwork carried out at the gasworks. A section of arched brick chambers, intepreted as a possible earlier retort house, were recorded.