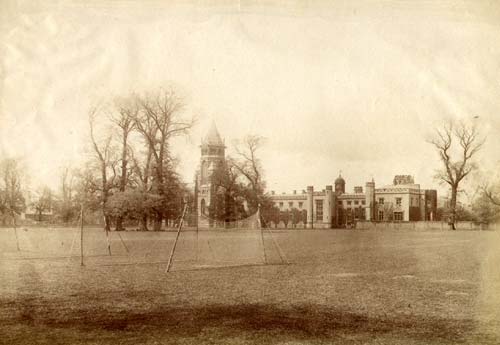 The present Rugby School dates back to the beginning of the Imperial period when it moved to this site. It is situated in Barby Road, Rugby.

1 The school moved to its present site in 1750.
2 The first major reconstruction, upon which the modern buildings are based, was in 1809-42 by Henry Hakewill. These comprised the old buildings, the Headmaster’s House and the Arnold Library. The group is grey brick and castellated. Hakewills front is varied… and a pleasing composition. This part is listed grade II nos 2/12 and described as Tudor Gothic, embattled, with mullioned windows and oriel over entrance. Hakewill may also have been responsible for Bradley House, a grade II listed building no 2/41, which is of a similar style to Rugby School House. “The real spirit of Rugger is Butterfield” who is responsible for the major part of the 1860-1870s restoration. He began work in Rugby in 1859. His parts are also grade II nos 2/3. His new quad is described as a masterpiece of personal inventive neo-gothic totally unconcerned with symmetry and regularity of red and yellow and black brick with fleuron friezes…ruthlessly varied…round the corner the controlled riot carries on. Generally Venetian Gothic. Pevsner sees the Chapel (1872) as “amazingly resourceful”. The building has a steep pyramid roofed octagonal central tower with big gargoyles sparring out, a short nave and low aisles, later rebuilt by Jackson in 1897.
3 Ambitious and characteristic of Butterfield, but not one of his best works.
4 Butterfield was also responsible for many other school buildings including the swimming bath (1876), the gymnasium (1872), the Rackets Courts (1880) and the Temple reading room and museum. Charles Nicholson’s War Memorial Chapel (1922) is regarded as very anaemic after Butterfield. It is cruciform, gothic, ashlar faced with a rib vault and pointed tunnel vaults. T G Jackson built the Temple speech room on 1908-1909. It is listed grade II no 2/40 and described as in his Carolean Style. Stone dressed red brick, westmorland slate roof, copper cupola, Doric portico. Typically Jacksonian mixture of Tudor and Baroque. Other architects involved in Rugby School are Scott who built “school field” in 1852 and Penrose (the old Sanatorium 1867).
6 Various metal objects, dating from the 15th century to the 20th century, found by metal detector.
7 Building recording was carried out on part of the School House as a condition of Listed Building Consent for internal alterations.