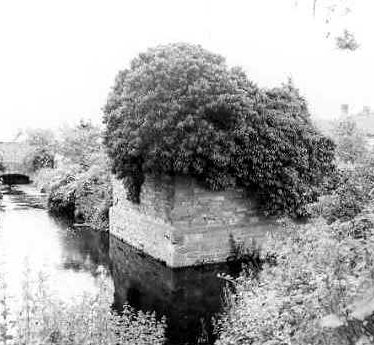 The site of a moat, a wide ditch surrounding a building, dating to the Medieval period. It is visible as an earthwork and is situated Whitacre Hall.

1 A large square moated area of Medieval origin, evidently constructed for defensive purposes. The moat is stone lined on the inner faces, and at each angle except the NE is a small square shell tower of red sandstone with open sides towards the internal area. Each wall, including the two short sides, overlooking the length of the moat, is pierced by a loop. Spanning the S arm on solid foundations (not arched) is a small Elizabethan gate house, large enough to admit a small vehicle, built of red brick and having an outer curvilinear gable-head. The entrance, in a square recess on the outer face, is round-headed and has the original nail-studded gate hung with plain strap hinges. Outside the moat are timber-framed farm buildings.
2 1953, as described, the moat being water-filled. 1976, in good condition. Measures 90m E-W by 75m N-S. The arms average 8m in width. The moat is fed by a spring to the NE. The gatehouse, the shell towers, 5m square and 3m in height internally, and the inner-connecting revetment walls are non-defensive ornamental features in Elizabethan brick.
4 Photographed in 1977.
5 This site is not described as a castle by any of the sources, but is fairly similar to Whichford moat (PRN 2342), which has been described as a castle.
6 Photograph of stone human head set into stone revetting of inner face of moat.