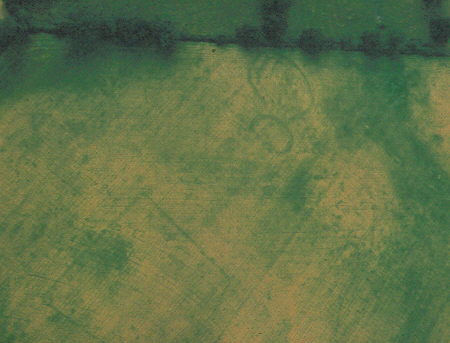 The remains of a Bronze Age cremation cemetery and an enclosure were found during an excavation. The remains were found 600m east of Bubbenhall.

1 Site threatened by gravel extraction and excavated by CADAS from 1965-70. A Late Bronze Age cremation cemetery and enclosure were discovered, overlain by an Iron Age settlement (PRN 5510). There appeared to be three groups of cremations. Five pits in Group 1, five in Group 2 and one in Group 3 contained pottery. Three radiocarbon dates fall into the later Bronze Age. The pots are mostly bucket urns. The cemetery was roughly linear, and orientated NE-SW. Enclosure A was a D-shaped enclosure with an entrance in the SE side, and appears from a radiocarbon date to be broadly contemporary with the cemetery. There could have been some form of relationship between the cemetery and the enclosure, although this is uncertain.
4 Air photograph.
5 Two D shaped enclosures, a large rectangular enclosure on the edge of Ryton Wood (See Record MWA4717), a penannular enclosure near to The Bungalow beside the A445 and a series of ditches were mapped as part of the English Heritage National Mapping Project.