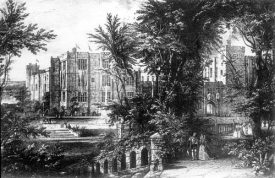 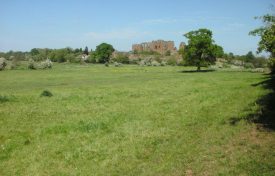 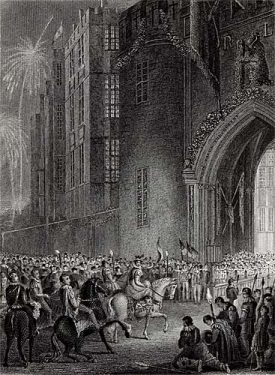 It’s been done many times before; legitimate a royal dynasty, or a hereditary right to power by piggybacking on one of Britain’s most lasting myths. Geoffrey of Monmouth featured Arthur heavily in his History of the Kings of Britain, Tintagel Castle was built long after the time of Arthur, probably in an attempt to legitimate Richard, Earl of Cornwall’s power. Edward III founded the Knights of the Garter, inspired in part by the round table. Visit Winchester, and the figure of Arthur bearing down from the Round Table has a remarkable similarity to Henry VIII, while Henry VII went so far as to name his eldest son Arthur.

Kenilworth, too, saw its landscape used in an attempt to legitimate the reign of a monarch, in this case Elizabeth I, by imposing a mythological link between her and the Once and Future King.

This wasn’t the first time Kenilworth had used Arthurian imagery. In 1279 there is reference to the establishment of a round table at Kenilworth, but by far the most noteworthy is Elizabeth I’s visit to Kenilworth in 1575. We are lucky enough that two (albeit differing) accounts survive; Langham’s Letter… and Gascoigne’s Princely Pleasures at the Court at Kenilworth. The latter recounts how when Elizabeth enters the gate she is greeted by the Lady of the Lake; it is only Elizabeth’s arrival on this day that has reassured the Lady that it is safe to reappear. Elizabeth’s reign, much as Arthur’s, is a time of hope where fear is vanquished.

Among the entertainments laid on for the queen during her visit the figure of the Lady of the Lake returns, with mention made of Merlin, and mythic stories contrived to relate to Elizabeth, her strength and her power. Elizabeth’s very presence quells the threat of Sir Bruce sans pitié.

Why is this significant?

The length of the visit, and extravagance of the entertainments shows an attempt to assert Elizabeth’s status. This particular period of her reign is a time when it is especially important to show a dynastic link back to the timelessness of myth, to authenticate Elizabeth’s power as monarch. Only five years before her visit to Kenilworth, the pope had declared her illegitimate, casting doubt on her reign, and her ability to quell dissent and win the backing of her people. In such a state of tension and flux, the stability of the Arthurian myth allows Elizabeth to be seen as natural successor to the great monarchs of the past; she is legitimised by her association with Arthur.

The linking of Kenilworth to Camelot, however, has also been suggested as an important part of Robert Dudley’s play to win the Queen’s hand (see Sterrantino). By suggesting he was of noble descent, and his familial line descends from Arthur, Dudley is thus positioned as an appropriate choice for the Queen to wed.