You are here: Home>Locations>Kenilworth>Ronald Gardner: From Agricultural Labourer to Electrician 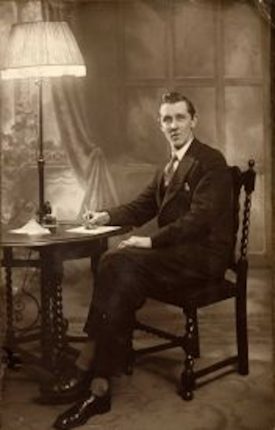 A portrait of Edgar Ronald Gardner. The photograph was probably taken around 1922 at the time of his marriage.
Photo courtesy of Peter Gardner 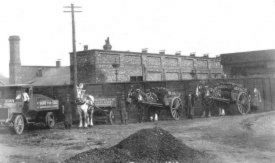 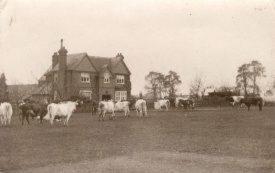 Edgar Ronald Gardner (known as Ronald) was exempted from combat in World War One, working instead as an agricultural labourer.  By World War Two he had become a film-maker and was recording the manufacture of aircraft parts at a Gloucester factory.  He went on to make films around the world for the United Nations. His son, Peter, became a social documentary photographer travelling the world and his grandson, Giles, is an internationally recognised film editor.

Born in 1894 in Reading, Berkshire to parents James and Sarah Gardner, Ronald  became an apprentice house painter and decorator and at age 16 was living and working in Ludlow, Shropshire before moving to Yew Tree Cottage on Warwick Road, Kenilworth. By the time of the First World War he was employed as a motorman by J & N Nadin & Co, coal merchants, of Regent Street, Leamington Spa.

“I will not join the Army”

He appeared before the Kenilworth Military Tribunal on 21st February, 1916 appealing his call-up on religious grounds.  He had been a Christadelphian for over four years and the committee therefore granted him an exemption to military service, but still required him to enlist as a non-combatant soldier.  As a result, Ronald took his appeal to the Warwick District Appeal Tribunal three weeks later, stating that “absolute unconditional exemption is the minimum that will satisfy my conscience …. whatever the consequences may be I will not join the Army.”

This appeal was ultimately successful as, in July 1916, the Warwick Advertiser reported that Ronald Gardner was exempted from combatant service as long as he undertook to take up agricultural work. Later that month he submitted a statement to the Kenilworth Tribunal to say he was employed at farm work by Mr Gee, of Castle Farm, Kenilworth, and the Tribunal considered this satisfactory.

After the war Ronald married Dorothy Allbutt on 4th August 1922 in Birmingham.  A daughter was born in 1926 when they were living in Perry Barr, Birmingham.  By the 1930s they had moved back to Kenilworth and were living in a flat at The Poplars, 22 The Square, Kenilworth at the home of Mr and Mrs Neale, a Christadelphian family.

On November 12th 1932, when Ronald was in business as an electrician, The Leamington Courier reported that he and a friend, Lawrence Lyall, were arrested and charged for begging in Stratford Road, Nuneaton. Ronald was playing a violin and Lawrence was collecting money.

Ronald said in his defence that his wife had bet him that he could not busk and get enough money to get a box of chocolates. The wager arose out of a discussion as to the means of livelihood open to “down-and-outs”.  They had collected 10s 6d in just ten minutes, but Gardner told the Inspector they would give some of the money to Dr Barnado’s Homes.  The case was dismissed as it did not fall under the laws of begging and the defendants were not of disorderly and idle character.

Ronald had a serious accident the following year while cycling in The Square at Kenilworth, colliding with a car.  He sustained a fractured thigh and was taken to the Warneford Hospital in Leamington, where he was operated on and two metal plates inserted into his leg.  He walked with a limp for the rest of his life.

Another tragedy befell the family when their daughter Frida, aged 9, died on 30th September 1935 due to an infection following a tonsillitis operation. She is buried in Kenilworth Cemetery.

Ronald went on to develop a career as a film maker.