You are here: Home>Locations>Leek Wootton>The Great Seal of England: a Treasure from the Waller of Woodcote Collection

The Great Seal of England: a Treasure from the Waller of Woodcote Collection 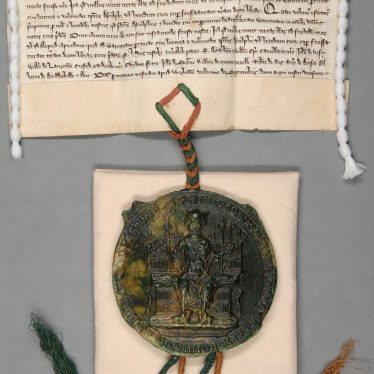 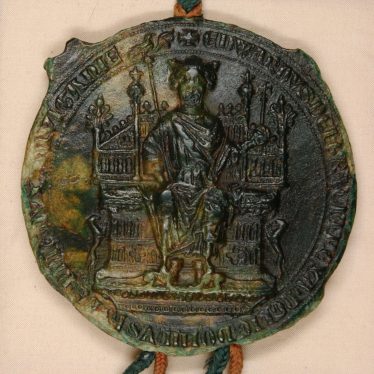 Edward I 'in Majesty' with sceptre and orb. Edward II's Great Seal was identical to his father's.
Warwickshire County Record Office reference CR341/2 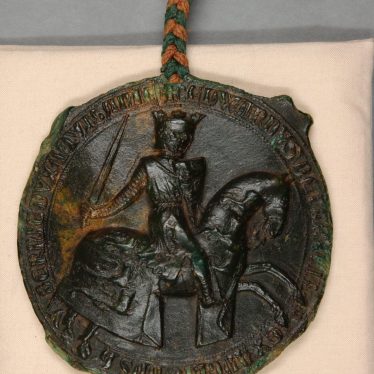 The 'Equestrian' side of the seal. Edward I was the first monarch to have a caparisoned horse on his seal.
Warwickshire County Record Office reference CR341/2

Most of the records we keep here at the Warwickshire County Record Office are written documents, on paper or parchment. These come in a myriad of different sizes, ages, and – dare I say – legibility. Quite rationally, we tend to focus more on what is written on the documents than anything else. Unless, of course, you discover something like the Great Seal of England, from 1292.1

This is quite difficult to ignore; not just because of its size, but also its excellent condition. One can still pick out the delicate details of the 700 year old imprint.

The seal (and the attached document) are from our Waller of Woodcote Collection, which consists of records belonging to the Waller family of Woodcote House, Leek Wootton, and their ancestors, the Wise family.2 Although they lived in Warwickshire, the family also had had estates elsewhere over the centuries, and this particular document is testament to this. It gives Asculph de Cleseby permission for ‘free warren’ over his demesne lands in Yorkshire, providing these lands are not part of the King’s forest.3 The permission itself is granted by the King, Edward I (1239-1307), as the seal used is the Great Seal of England, a seal which was used to specifically signify the sovereign’s approval. Every monarch since Edward the Confessor has used such a seal, including our present Queen.

‘Edward by the grace of God’

The seal is impressive, partly due to its imposing size. Most seals were smaller, as of course many would have been created by the use of personal rings. It seems appropriate that the King’s should be large, to better impress upon those receiving it his power and authority. English medieval seals such as this were normally made of beeswax, and could, like this one, be dyed using various different pigments – this one has probably been dyed green with the help of verdigris. The legend – the lettering around the edge of the seal – reads ‘EDWARDVS DEI GRACIA REX ANGLIE DOMINVS HYBERNIE DVX AQUITANIE’, which translates as ‘Edward by the Grace of God, King of England, Lord of Ireland, Duke of Aquitaine’. Like all Great Seals, on one side he appears ‘in Majesty’, that is, enthroned with the marks of his office such as his sceptre and orb, and on the reverse he is in an ‘Equestrian’ pose, on horseback.

Although these two portraits followed the tradition of the Great Seal which had been in use since the 11th century, the seal still conveyed an image of kingship and military power that was so effective that Edward II, his son, felt there was no need to change it. His seal is identical to his father’s. Considering their respective reigns, it is not surprising that Edward II wished to emulate his father. Edward I was a seasoned soldier, who had fought in the eighth Crusade prior to his succession, and whose kingship was characterised by the domination of the Welsh and Scottish territories, as well as putting forward significant legal and administrative reform. By the end of his reign, in 1307, parliaments had become an established feature of political life.

Edward II’s rule, however, was less rosy. There was resounding opposition towards him and his advisers throughout his reign. Militarily too, he lacked the success of his father, as we can see from the disastrous defeat of the English at the Battle of Bannockburn in 1314. Eventually he was deposed in favour of his son Edward III. It is perhaps no wonder that he wished to copy his successful father, to emphasise that he was just as worthy a king, especially as his reign was so fraught with division.

In a time when the majority of the population could not read or write, a pictorial representation of the monarch’s authority was easier to comprehend. Even today, the seal is impressive.  We are lucky that such an ancient and striking reminder of Edward I’s sovereignty still exists.

2 There are more articles about this collection on this website. These include the Early years of the Waller and Wise families, along with later years at Woodcote House, and the Wises at Warwick Priory.

3 Free warren was the right to keep and have custody over game.

This article is September 2016’s Document of the Month for the Warwickshire County Record Office. Further articles can be found on their website.

Linkedin
More from Leek Wootton
More from National Government, Sovereigns, and Heads of State
More from Social history
More from Warwick District - Others