You are here: Home>Locations>Warwick>The Assassination of Abraham Lincoln

The Assassination of Abraham Lincoln 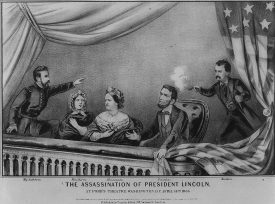 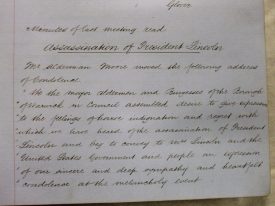 Abraham Lincoln was assassinated in 14th April 1865. A tumultuous event in world affairs, this act also reached Warwick, and excited much talk and reflection amongst the councillors, media, and people of the county town.

The news of Lincoln’s assassination was received in Warwick on Wednesday 26th April, with official confirmation a day later. It attracted much shock, horror and debate amongst the locals. General consensus appears to have been that the South had been out of control, and a number of ‘terrorist’ attacks, for want of a better modern term, had been committed by the South before this atrocity. The Warwick Advertiser of 29th April reported that “if the news of the President’s murder was unprecedented, the manifestations it has produced throughout the country are also without a parallel”.

Warwick, indeed, was moved to pay note to the event. At the Council’s quarterly meeting of 9th May, Alderman Moore passed his condolences to the American government and people. The news had given rise to “feelings of horror indignation and regret.” The United States Minister’s response on the 6th June is given to the 13th June meeting. He “desire[d]… to express on behalf of his country his grateful sense of the feeling which prompted this communication,” forwarding the message of condolence to Washington.

Meanwhile, the Warwick Advertiser continued to strike a strident tone against the South and Lincoln’s murder, pointing out that the act would not help the South’s cause, and warning any Englishmen supporting Southern independence that the civil war was motivated by a desire to maintain slavery. Damning the South as “the wickedest community in the world” (6th May 1865) the tone from Warwick’s newspaper was nothing if not firm.

In the Advertiser’s view, Lincoln’s assassination “has blindly elevated… [him] into a martyr.”

Lincoln’s assassination was one of the last acts of the American Civil War. The Advertiser reports that Johnston’s army surrendered on the 9th May, virtually bringing a halt to the war. From the Advertiser’s perspective a weakened South was good for Britain, and would lead to better relations between the two nations.