Starting at Hampton on the Hill School in the 1950s 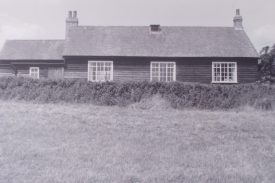 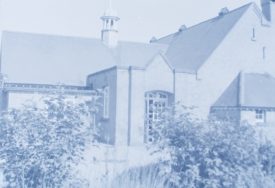 I went to school in Hampton on the Hill in the 1950s. The village was very different in those days, busier with a blacksmith, post office, small shop, Grove Park House and of course the village school. The village hall was the centre of the community with regular jumble sales, beetle drives, whist drives, and teas. It also served as the venue for our school plays.

The school must have taken about 30 pupils in those days consisting of children from the barracks, farms, Grove Park Estate and the village itself. There were also a few children who travelled up from Warwick.

The start of the day

My day usually started having to sit on my Aunty Dorothy’s Rayburn reciting my times tables just before I set off for school. She was a teacher at All Saints in Warwick and lived in the Old School House opposite the village hall. She would leave at 8:30 in her Morris Minor to drive to school. The head teacher at Budbrooke was Miss Cooper. She lived in Warwick and also owned a Morris Minor, which she arrived in each morning.

My first teacher was Miss Rawlings, she was very stern and all the class was a little bit afraid of her. I remember my first day which would have been 1954, where a group of us started our six years of education. One girl cried so much her mother was called to collect her. This would have been difficult for some as most people didn’t have a telephone. There were often little accidents and knickers and pants would be put to steam dry on the fire guard of the large open fire in our classroom.

There were two classrooms but the large one could be divided by a large wooden roller to make three rooms. Other teachers at the school were Miss Fanshawe and Miss T? Whilst I was there Miss Cooper retired and Mrs Wilkinson took over as head and came to live in the school house (which is still standing). On Mondays we would take our half crowns down to the post office walking in a very orderly line holding hands in pairs to buy a National Savings Stamp. From memory I think they have the royal children, Prince Charles and Princess Anne on them.

Nuns around the village

There would always be lots of nuns around the village; they lived in Grove Park House where they looked after the young trainee priests. At lunchtime our food was delivered in a van driven by Mr Hatwood who had one arm but managed to drive and carry the large aluminium containers of food into the kitchen. The food was cooked in the central kitchens at Coten End school in Warwick. Lunch, or dinner as it was called, was served by Mrs Millington known affectionately as Milly. She lived in the cottages opposite the school and was lovely, round, always smiling and jolly with rosy cheeks. I really hated stew, always served on Mondays and full of gristly bits.  Miss Rawlings would stand over us to make sure we ate it all and were grateful for the privilege. It used to make me heave and I pleaded with my mother to send a letter saying I was allergic!