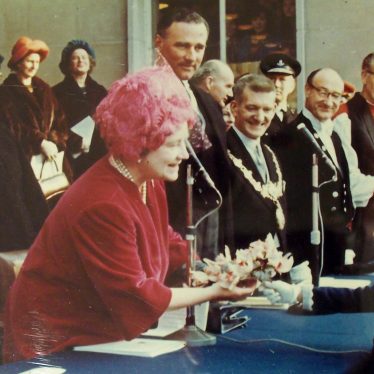 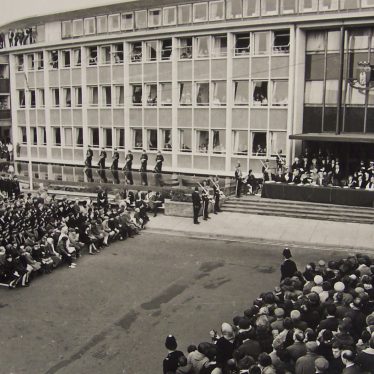 Staff lean out of their office windows to catch a glimpse of the Queen Mother.
Warwickshire County Record Office reference PH143/1155 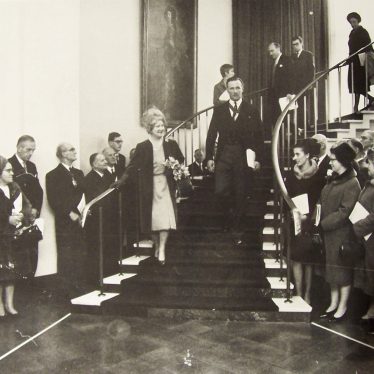 On this day, Warwick had shined its shoes and brushed itself down to welcome Her Majesty, Queen Elizabeth the Queen Mother as she came to open the completed Shire Hall extensions.

Work on several phases of extensions to Shire Hall and other council buildings had been going on (except during the war) for 32 years and overseen by four county architects. The last stage of redevelopment cost an estimated £550,000 (around £9.5million in today’s money).

“It is as a result of decisions taken nearly 40 years ago that Warwickshire has today a compact yet adequate centre for administration of the County town,” wrote Sir Edgar Stephens, Clerk to the Council at the time, in the souvenir programme for the Queen’s Mother’s visit. “It contains a blend of styles, which is perhaps unique, of public architecture of the 18th and 20th centuries.”

The Queen Mother was a great favourite with Warwickshire residents, and had already visited Warwick three times since 1951. As well as the opening the Shire Hall extensions she also unveiled a portrait of Sir Edgar Stephens, commissioned to honour his 40 years of service to the County, and took a tour of Lord Leycester’s Hospital.

Local newspapers devoted plenty of column inches to the royal event, and both the Warwick Advertiser and Leamington Courier reserved four pages of pictures and text to cover all aspects of the visit.

The Advertiser reported that over 2,000 people had gathered to greet the royal visitor and that her arrival had been heralded by a peal of the bells at St Mary’s Church, rung by the Coventry Diocesan Guild of Bell Ringers. The Leamington Courier estimated that the Queen Mother had shaken over 100 hands during her five hour visit and was impressed by the new council buildings. She reportedly felt that the dignity of 18th century Warwick had been happily combined with the exciting atmosphere of the 20th century.

For more than 600 years there has been a building in the centre of Warwick associated with a County Authority. In 1576, the earls of Warwick granted to the borough corporation a building, “le Shirehall”, to be used for Quarter Sessions and Assizes as well as elections and other purposes.

By 1740, the condition of the building had deteriorated and an order was made by the Quarter Sessions to rebuild. There is some disagreement as to who designed this new building. Some ascribe it to Sanderson Miller, squire of Radway and a well-known amateur architect of the time. Others suggest that Miller submitted a drawing which was not accepted, and the eventual designer was Mr Francis Hiorn.

Whatever its origins, the Greek-inspired columnar façade on Northgate has become part of the furniture of Warwick and all other buildings have been extensions to, or rebuilds of, that building.

Earlier extensions had been formally opened in October 1932 and this was followed in 1948, despite severe restrictions on the availability of building stone, by the refacing of Shire Hall in Hollington stone (as the deteriorating stonework had become dangerous). The cartouche carrying the county’s arms was added to the pediment at this time.

Do you have special memories of the Queen Mother’s visit of 1966? We would love to hear from you if you were there on that day.