Seal of King George II (1727-1760). The text around the outside of this seal would have read: ‘BRVNSWICE[NSIS] ET LUNEBURGEN[SIS] DUX SACRI ROMANI IMPERII ARCHITHESAURIUS ET PRINCEPS ELECTOR’ (Of Brunswick and Luneburg, Duke, of the Holy Roman Empire, Arch-treasurer and Prince-Elector)
Warwickshire County Record Office reference CR1291/Box30/747. 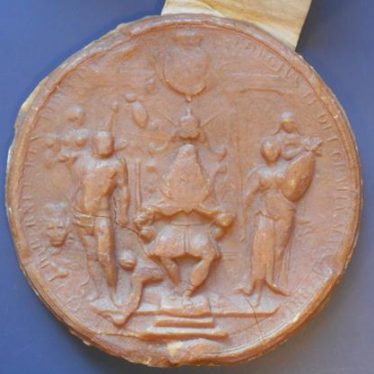 Seal of King George II (1727-1760). Whilst the text around the outside is unclear, it would originally have read: ‘GEORGIUS II DEI GRATIA MAGNÆ BRITANNIÆ FRANCIÆ ET HIBERNIÆ REX FIDEI DEFENSOR’ (George II, by the grace of God, of Great Britain, France and Ireland, King, Defender of the Faith).
Warwickshire County Record Office reference CR1291/Box30/747. 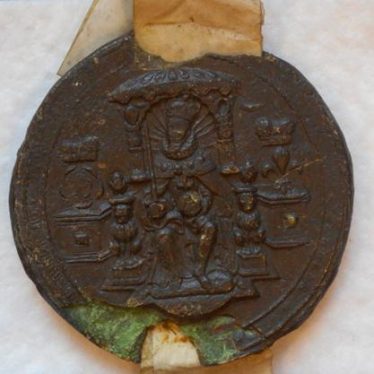 Seal (unidentified). It appears to show an image of a King wearing a crown and he appears to be holding an orb in his left hand and a sceptre in his right. To the right of the figure is a fleur-de-lis under a crown and to the left, what looks like a Tudor rose under a crown. The text around the outside is difficult to read.
Warwickshire County Record Office reference CR1291/Box30/747

The main aim of attaching a seal to a document is to prove the authenticity of a document by proving a relationship between the document and the seal itself. Seals can either be an Applied Seal, where the seal is applied directly to the paper or a Pendent Seals, this means that they dangle below the document by some form of attached tag, often either made from a piece of ribbon or a strip from the parchment itself. They often contain an image, such as the owner’s portrait or heraldic badge, surrounded by text or the ‘legend’ running around the perimeter. Both of the seals on display are Pendent Seals which have become detached from their original document.

Originally, Pendent Seals were attached ‘Sur Simple Queue’ or ‘on a simple tail’. This meant that they were attached by cutting along the bottom edge of the document so an attached strip was created to which the seal was fixed. These had the problem that they easily detached from the document due to the weight of the seal.

A more secure way to attach the seal to the document was ‘Sur double queue’ or ‘on a double tail’. This involved folding up the bottom edge of the document, cutting horizontal slits and then passing a double strip of parchment or material through the slits to which the seal was attached. This, though not completely fool proof, was a much more effective way of preventing the seal from detaching.

Historically, seals were impressed in a wax made from two-thirds beeswax to one-third resin. By the period that these seals are from, resin had become the main document material to impress in order to create the seal. The natural colour of these seals were a yellow or brown colour but they could be dyed vibrant colours. In fact, in mediaeval chanceries, seals were often dyed different colours to reflect their different function or the department of state that was using it.

This article is March’s Document of the Month for the Warwickshire County Record Office. Further articles can be found on their website.