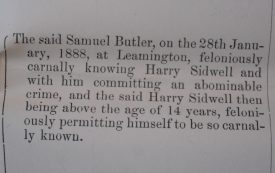 In part one, we learnt that Samuel Butler and Harry Sidwell had a sexual encounter in 1888. It was a time when homosexuality was illegal, and these two men were caught and taken to trial for their actions. They were each given a prison sentence with hard labour.

Aside from this brief snapshot into what must have been a traumatic moment in their lives – their trial and conviction – what do we know of these two men? Unfortunately, nothing survives from Warwick Prison (pictured) to record their time spent there – although one can’t help but wonder whether their imprisonment together allowed them scope to spend time together or whether they were actively separated.

Samuel was a tricky individual to track down; in nearly every source he gives a different age. We are, with some difficulty, able to trace him back through the censuses to find his actual birth year, which was 1849. We do know from the newspapers that he was a porter, and may have located him on the railway records for Rugby Station. An entry for a Samuel Butler in the employee records state that he was paid 17 shillings and 6 pence, that he was 5’6½” and that he lost his job in 1890. It seems that Samuel retained the support of his family despite his conviction; after his release Samuel moved into the home of his eldest brother’s family, along with his now-widowed father. He was able to find work as a general labourer. It seems he remained unmarried, but I have been unable to track him beyond the 1891 census.

Harry’s life took a different path. He was born George Harry (or Henry) Sidwell, in Leamington on March 6th, 1870. His father was a porter/coachman, and at aged 11 he is listed in the census as a scholar. No records survive of his time in prison, but three years after the trial, at the age of 21, it appears he was lodging in King’s Norton and working as a groom. Ten years later, in 1901, signing himself George Henry Sidwell, he got married to a lady called Clara Brookes. At the time of their marriage he was 31 years old, living at 70 Ravenhurst Street in Birmingham. They had a child together in 1904 – a daughter also named Clara. At some point they moved to Herbert Road, Birmingham, where he was working as a blacksmith striker.

If it wasn’t for their arrest, trial and conviction, we would never have known about the relationship (whether brief or long-lasting) between Harry Sidwell and Samuel Butler. Perhaps one lesson is that it does not do to assume anything about a historical individual’s sexual – or gender – identity, unless we have direct evidence. Even here, we cannot say that these men considered themselves to be gay or bisexual (terms which have had different meanings over the years) – the behaviour does not necessarily equal the identity. We have no records of these men’s voices, their thoughts or emotions. And yet we must also think how many LGBTQ+ individuals are lost within our archives, still holding their secret, protected from the persecution of the law and therefore hidden by the banality of the records which describe them.