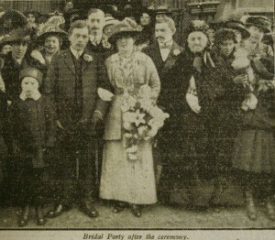 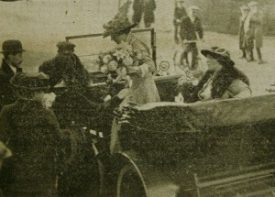 The invasion of Belgium ruined the life-hopes of many ordinary Belgian folk. One couple was Victor Buelens and Emelie Alice deKeyser from Louvain who had planned their marriage for 22nd August 1914. However, they, with Emelie’s family, fled as Germans bombarded the area. After travelling across Belgium, enduring dreadful hardship they reached Folkestone and were relocated to Rugby. Plans for their wedding at St Marie’s were remade assisted by a Belgian priest living at St Marie’s College. The Rugby Advertiser reported the ceremony extensively in English and Flemish1.

Victor, a printer by trade worked at BTH, and lodged at 17, Hillmorton Road with other refugees. Emelie, a dress-maker in Louvain, made her own costume. St Marie’s was packed full with Belgian and local well-wishers. A priest from Liege conducted the service in Flemish with family members attending. As they left for the wedding breakfast, provided by the Relief Committee, the Belgian national anthem was played on the bells. The happy couple received an ovation from scholars of the college. Useful presents were given by friends and sympathisers and this day was their happiest at a bleak time. In 1916 baby Louis arrived2, and presumably they returned home when hostilities ceased.