You are here: Home>Locations>Leamington Spa>Warwickshire at War: Births and Marriages, January 1915 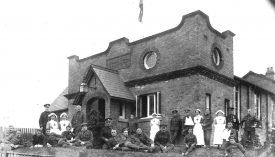 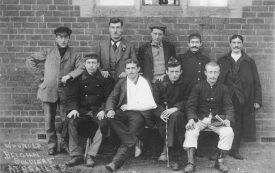 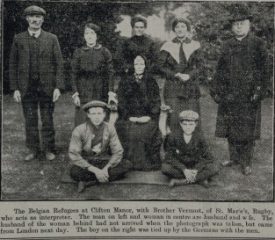 Reading through the news stories for January and February 1915, there are some interesting war-related births and marriages in Leamington Spa.

In the newspaper, published on 15th January 1915 (Warwick and Country Edition Page 5, Column 1) there is a birth reported from The Women’s Belgian Hostel in Leamington Spa. The baby was born at the hostel on 13th January 1915. The christening details are then mentioned in the edition on 22nd January 1915 (Warwick and Country Edition Page 5, Column 3) with details that the baby has been christened “Albert Georges Leam”.

However, there is a sad end to this story when you look at the February editions of the newspaper. On 19th February 1915 (Warwick and Country Edition Page 4, Column 3) the following is reported: “The Women’s Belgian Hostel. The baby born on 13th January 1915 and christened “Albert Georges Leam” sadly died on 16th February and was buried at the Roman Catholic Cemetery on 18th February.”

There is also an interesting story of contrasting weddings in the January editions of the newspaper. On 22nd January 1915 (Warwick and Country Edition Page 3, Column 4) the wedding of Hayhurst-Cook, All Saints, Leamington is reported but “owing to the war the wedding was very quiet and there were no bridesmaids.” A week later, on 29th January, another wedding is reported but this is in complete contrast to the Hayhurst-Cook wedding. Under the heading “A Military Wedding”, there are details of a full military honours wedding with a guard of honour (an archway of swords under which groom and bride exit the church) of a Corporal billeted in Newbold Street, Leamington, to a girl from Essex (Warwick and Country Edition Page 4, Column 1).

Linkedin
More from Leamington Spa
More from Births, Marriages and Deaths
More from World War One