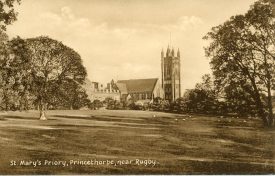 St Mary's Priory, Princethorpe: View of the Chapel and other buildings from the North West
Image courtesy of Princethorpe College 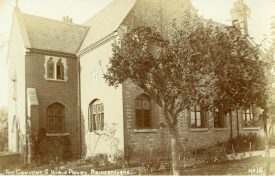 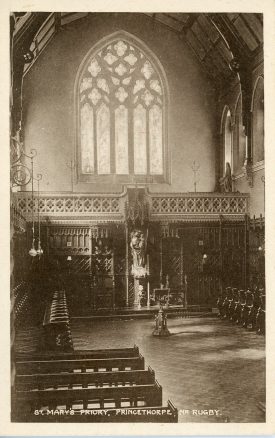 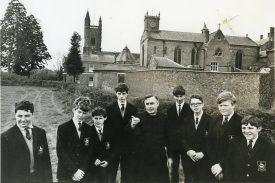 It is not clear why the Benedictine nuns chose Princethorpe in Warwickshire. The site certainly had (and still has) attractive features: it was raised up, surrounded by woodland and hills, and so offered seclusion. Natural springs emerged to the north and provided fresh water; there was good farmland and clay.

After the foundation stone had been laid in July 1832 by Thomas Walsh, the titular bishop of Cambysopolis, construction work began in earnest in 1833. Although Pevsner states that Mr Craven designed some of the earliest structures, it was more likely he acted as Clerk of Works, though he had past experience of other religious buildings, chiefly in Spain. The first individual who had a great impact was John Russell, best known for the Congregational Chapel in Leamington (1836). Whoever provided the most influence, the intention was to create something like the house at Montargis, and a pasteboard model of that convent was available to the architects. Russell and Craven worked on the oldest parts of the priory (1833-5). Around 500 men were employed for the work and the clay for the bricks was dug from fields to the north known as ‘Wood Close’ and ‘Wood Wallis’; the bricks themselves were fired in ‘Brick Lane Close’.

The next individual involved in the construction of the priory was Joseph Aloysius Hansom, best known for patenting the ‘Hansom Cab’. He most likely joined the project in or around 1837 when Russell fell ill; he also accelerated the rate of progress. A number of very interesting buildings were constructed at the priory. The first church, consecrated in 1843, sits at the centre of the complex, just as it had done at Montargis, facing south (its liturgical east end). The square turret, bearing a clock and housing three specially commissioned bells, supported a wooden steeple that collapsed in 1900.  Hansom was also responsible for the ‘Tour’, or guest house, made of brick and resembling a gate house, complete with crenulations and ‘Georgian-type’ windows. The ‘Round House’, a circular room with brick walls and arches pointing heavenward, was erected as the nuns’ mortuary and remains the resting place for ninety sisters and four or five lay people.

Peter Paul Pugin, third son of A.W. Pugin, was responsible for the second chapel, the most significant addition to Princethorpe since its foundation. Begun in 1897, its tower dominates the skyline. It was consecrated by Bishop Illsley on 8 May 1901, who was assisted by the clergy and choir from Oscott. The church was dedicated to ‘Our Lady of the Angels’ and the relics of St Fructuosa were placed under the high altar.

The priory and girls’ school developed but the good times were not to last. Unfortunately, fewer postulants joined the community and the numbers on the pupil roll declined. The community therefore made the decision to sell the priory and possible purchasers, including a religious sect, were suggested in the local newspapers. In the end, it was purchased by the Missionaries of the Sacred Heart (MSC), an order of priests founded in nineteenth-century France by Jules Chevalier. The MSCs owned St. Bede’s, a boys’ school in Leamington, and had run out of space. The Benedictine community departed for a new house at Fernham (Oxfordshire) in 1966.

Under its first headmaster, Father John Kevin Fleming, the College flourished. Like all institutions, the school developed and changed. The first church was adapted into a study hall (now the library) and gymnasium (now theatre), and a sports hall was built in 1979. The College eventually moved from a boys’ boarding school to a co-educational day school. In time, a lay trust was eventually established to govern Princethorpe whilst the MSCs decided to focus on missions overseas. The College also merged with St Joseph’s, Kenilworth, which is now better known as Crackley Hall and acts as the College’s junior school; a further merger with Abbotsford School followed in 2010. Even though a great deal has happened to Princethorpe over the years, the Christian ethos, practised by both the nuns and priests, is as strong as it has ever been.

This is a very brief account of Princethorpe and research into its history continues. The College will celebrate its Golden Jubilee in 2016 and a commemorative book will be published to coincide with this anniversary.