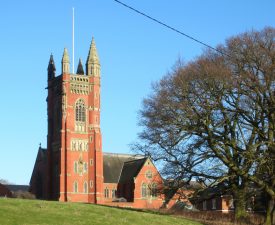 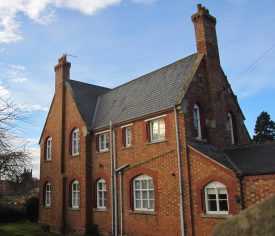 ‘The Benedictine Priory, which was situated on a hill outside the village [of Princethorpe], was the oldest and largest convent. It was established early in the 19th century by French Benedictine nuns, who had settled in Warwickshire having been forced out of France following the French revolution…Their school was quite posh and catered for the daughters of wealthy Catholic families who lived both at home and abroad, but it also had a few day girls from elite local families. Strangely, three of us poorer local girls also attended some classes at the priory school, possibly because we were regarded as star pupils at the village school and maybe as candidates for the Benedictine novitiate, though none of us became nuns. The singing of the Nuns in the choir was exquisite…One local man who visited the Priory every day as a young boy, with buckets of milk hanging from a yoke on his shoulders, said it was heavenly.’

‘Much has changed at the Priory since those days. The nuns could not attract enough new postulants and moved to a smaller convent outside Warwickshire in 1965, so their exclusive school for girls was closed, and re-established as a boarding school for boys run by another French Catholic Order, the MSC Fathers. Eventually they could not attract enough new priests into the Order to run the school, so Princethorpe College ceased to exist as a Catholic Boys Boarding School, and is now a very successful day school with over a thousand pupils of both sexes. The ethos remains Catholic but there are no nuns or priests on the teaching staff, only laity, and none of the pupils are boarders.’

‘The other convent was occupied by three Sisters of Mercy. They taught at the village school I attended, the Order having settled in Princethorpe in 1897…The Priory Sisters wanted a religious community to teach the children and agreed to build a new convent to house these nuns. They built this about a mile from the village school and I would often visit the convent to collect the teacher’s mid-day meal, and on other errands too…Whenever we went to fetch the nun’s dinners Miss Quigley would give us a cake, a jam tart or something else she had baked. She was a wonderful cook and she plated the dinners we collected in a wicker basket…We would ride to the convent on our bicycles, collect the basket and rush down the Coventry Road back to school steering with one hand and holding the dinners in the other. There were no accidents but holding a big basket in one hand whilst steering along a busy road with the other hand was not easy, and when we reached the bottom of Coventry Road, which was quite a steep hill, we would have to dismount before we could turn right and continue into the school playground.’

Part seven can be found here.