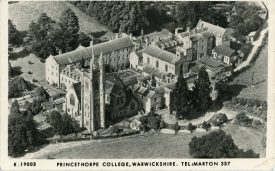 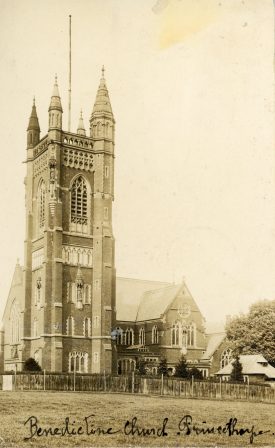 Princethorpe College, which is located in a former Benedictine priory, owes its existence to the French Revolution. However, its story really begins in the 17th century.

On 13th May 1630 Marie Granger left the Benedictine house at Montmartre in Paris, where she was a member of the community, to travel to Montargis, a small town situated to the east of Orleans. She had been selected to reform a convent there and restore its regular life. Marie arrived with a number of sisters on the 19th of the same month and decided to pledge the new foundation to the Blessed Virgin Mary; the convent church was therefore dedicated to ‘Our Lady of the Angels’. However, prior to her departure from Montmartre, she received a vision, not of the Virgin, but of Christ, who held a cross on which there was a bleeding heart with three nails surrounded by a crown of thorns. This became the community’s emblem.

All went well for many years until the revolution. This event had a colossal impact and religious communities suffered greatly. In 1792 the nuns of Montargis decided to leave France and seek asylum elsewhere. The direct overland journey to their intended destination, Flanders, was considered too dangerous and they decided to travel by way of England. The sisters reached Dieppe on 9th October and were transported across the Channel by Captain Burton of the ‘Prince of Wales’. It was a very stormy crossing, which meant that a ten hour journey took twenty-four.

Forty-three sisters arrived at Shoreham in Sussex with only four pennies to their name. Fortunately, the Prince Regent (later King George IV) was at the nearby town of Brighton, accompanied by Mrs Fitzherbert, who had been alerted to the nuns’ journey beforehand. Carriages were despatched to Shoreham to transport the nuns to Brighton, where they were housed in a hotel. The Prince and Mrs Fitzherbert visited them on a number of occasions. At one meeting, he convinced them to remain in England, rather than risk onward travel to Flanders.

Following the Prince Regent’s advice, the community remained in England and lived a somewhat peripatetic existence until it settled at Princethorpe. The sisters’ first port of call was London, where they rented two houses, Numbers 1 and 2 Duke Street, which offered living accommodation with space for a chapel, infirmary and a girls’ school. However, these two houses became too small for their needs and they moved to Bodney Hall in Norfolk, which had been offered to the community at a peppercorn rent by Mr Tasburgh.

Despite some anti-Catholic opposition in the locality, the community and school flourished, so much so that larger premises were required. In 1813, they moved to Heath Hall, a large Elizabethan house near Wakefield in Yorkshire, owned by the widow of the Honourable John Smyth. However, further space was eventually required and the community purchased Orrell Mount, near Wigan, in 1821. This Georgian house was enclosed by parkland, and thereby offered the Benedictines  the peace and privacy they required. Unfortunately, former mineshafts littered the area and made the sinking of foundations, necessary for further building work, impossible. The decision was taken to look elsewhere.

Part two of this history looks at the foundation of the priory in Princethorpe, and its development into a modern school.