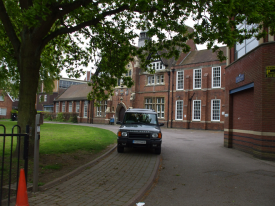 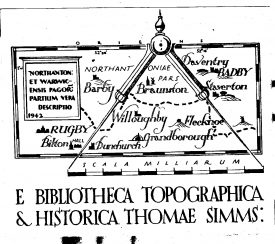 Thomas SImms bookplate, designed in 1942. He gave me this in c. 1946.
Image courtesy of Edward Reid-Smith

Ben Earl’s contribution on this website about Lawrence Sheriff School (LSS) in Rugby brought back memories of my time there during 1941-1946.  At the end of his article Ben mentions Wells & Russell’s 1978 book on the school, and this reminded me of a visit to the school some years ago when the headmaster at the time gave me a copy1.  Most of the masters and some mistresses at LSS were briefly noted by the authors of the book, and those serving for at least 20 years have a special paragraph each. Some, however, rate little mention: “Time, like an ever rolling stream, bears all its sons away; they fly, forgotten, as a dream dies at the opening day” (as Isaac Watts’ hymn has it). Which, of course, is why we have archives and museums  ̶  and why I want to remember Thomas Simms.

Tucked into my copy of the book are a couple of pamphlets which T.H. Simms (master at LSS 1930-1946) gave me; they were the 1911 Report of the Board of Education’s inspection of the School, and the 1937 dedication of the memorial to Henry Victor Whitehouse (headmaster 1889-1904).  These are just two items which Thomas Simms (popularly known as “Balbus” to the students) passed on to add to my own small collection of LSS material, about the time that we both left school in the middle of 1946.

Balbus was born in Oxfordshire in 1908 and died in Cambridge in 1990 age 81.  He joined the staff of Lawrence Sheriff School soon after graduating M.A., and taught history there until the war’s end gave him an opportunity to move.  He was one of a small number of masters who influenced my life; in his case he was responsible for my life-long interest in history of any sort – local, national, family and economic.

One of my memories is of the sports pavilion behind the school being used as a sorting area for newspapers and documents collected by students during the war as part of the national recycling effort – paper was in short supply due to the importation of so many goods being restricted because of the horrific loss of merchant ships, torpedoed by German submarines.  Balbus, like others, must have been torn between the then current patriotism and longer term considerations, when he discovered that some old documents collected from solicitors’ offices were of historical value.  He conscientiously sorted through the piles of papers to rescue the doomed treasures.  What happened to these I do not know – perhaps eventually some may have found their way into the Warwickshire County Record Office.

Balbus left LSS to go to Homerton College (at that time a teachers college for girls) in Cambridge, where he spent the rest of his career and his life.  There in 1951 he began working through the college’s archives dating from the 17th century, and which he used to write its history which the trustees published in 1979.  Other works were “The rise of a Midland town: Rugby 1800-1900” published in 1949; “Citizenship: a select book list” in 1953, “From three to thirteen” with Joan Anne Simms in 1969; and “Fulbourn: growth of a Cambridgeshire village” in 1984.  Apparently he also bought a David Cox pencil drawing of a hill in Derbyshire in 1963.

I still have eight handwritten pages which I copied in 1949 from a manuscript notebook belonging to him, in which he had collected newspaper references to the foundation of the school, and other matters.  Where is his original notebook now?  Unfortunately he never got round to giving us his own history of Lawrence Sheriff School and district, for which he had collected various original documents over the years.

1 In the 1990s I wrote many brief personal comments in it, mainly about teachers but also a few other memories; it is now safely in my archives in Australia where perhaps one day an Old Laurentian will discover it.