You are here: Home>Locations>Coventry>Wartime in Coventry, and Afterwards

Wartime in Coventry, and Afterwards 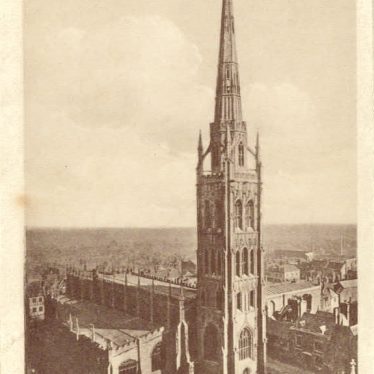 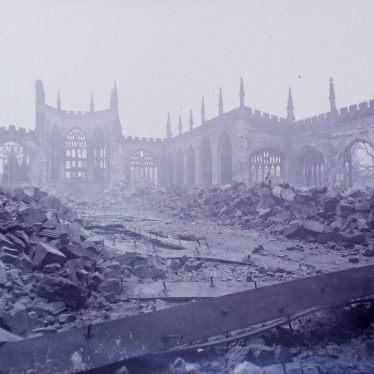 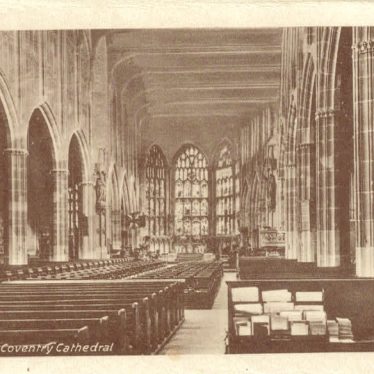 The inside of Coventry cathedral, pre-war.
Image courtesy of Eddie Richardson

When I was around two years old a bomb was dropped in the back garden. Oddly and luckily, it didn’t destroy the house at all. However, it did move the house on the foundations, so they ended up sticking out from then on. Strangely, it was only houses up the road where their windows were broken. I first remember being told of it when I was five but I didn’t find this scary, just interesting.

Later, after the war, I remember going into Coventry city centre and see the ruins of the cathedral and a crater where Owen Owen department store had been. I was sad as it was a very good department store. The burned wood from the cathedral was made into a cross, that is still on display today, and has become an icon. I regret having not seen the Cathedral before it was bombed, I would’ve loved to see it.

It must have been very overwhelming, and was amazing to see how the centre of Coventry had just ‘gone’. But I also remember how it was a bit like being out of site out of mind after it had been bombed, due to it not being bombed again. As Coventry was bombed when I was only 18 months old, I don’t have many memories of what it was like during the war, just when I went to the cathedral afterwards.

Apparently I had scarlet fever when I was two, so had to be admitted to hospital. Whenever the air-raid siren went off we had to get under our iron cots and they would put the sides down so we were protected underneath. I was scared and didn’t want to eat the dinner they gave me, but the ward sister refused to let a two year old beat her!

We ate well, we managed. It wasn’t got rid of until the 50s, and eventually you could buy a halfpenny worth of sweets. It was good food though – nothing fancy, but not bad, it was things like bread and potatoes.