You are here: Home>Locations>Atherstone>Pork Pies and Pigeons! Lost Property in Nuneaton and Atherstone, 1902-1953

Pork Pies and Pigeons! Lost Property in Nuneaton and Atherstone, 1902-1953 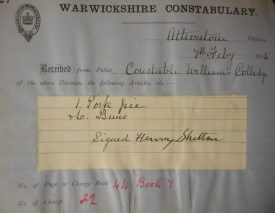 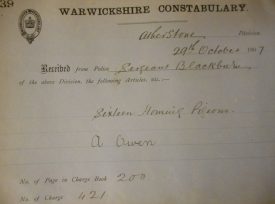 There are all sorts of fascinating documents in the Warwickshire County Record Office which can provide an unusual and unexpected insight into society at a period in time. The ‘Atherstone and Nuneaton volume of receipts for property’ (basically a police lost property book) is just such an item.1

It’s quite an unassuming volume, but skimming through the pages we can see the sorts of items which were being lost and found (or stolen and seized) in early 20th century Nuneaton and Atherstone. A lot of the earlier pages refer to sums of money being handed in, while such entries seem from a brief glance to decline in later years. We also find quite a few pipes and pocket knives, which perhaps slipped out of coats. In the later pages, most entries seem to refer to bicycles; was bike theft on the rise or simply bike usage?

Of course, when looking at a book like this, our instinct is to hunt out the bizarre. My interest was first piqued when I saw an entry for ’10 shallots’ and I went on to find that a pork pie was seized in February 1905, a bottle of stout in February 1907, eight hens eggs in May 1925, and a jar of picked onions in October 1939. Each of these entries had a charge number, so were presumably stolen and recovered.

Impressively, in October 1936, a ‘Woodbine’ Automatic Cigarette Machine was received by the police – I can’t help but wonder how the owner lost such a large item in the first place! The same could be said of the canoe received in 1945.

However, my two favourite entries both come from the same date: 29th October 1907. One can only imagine the ruckus at the station when sixteen homing pigeons and one ferret arrived care of Police Sergeant Blackburn! It was a brave, if foolhardy, thief who thought they could sneak off with such a haul…