You are here: Home>Locations>Coventry>Assorted Coventry Folklore 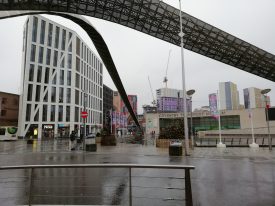 Where the pool used to be. The Smithfield Hotel is about where the Nisa sign is in the left of the picture.
Image courtesy of Gary Stocker 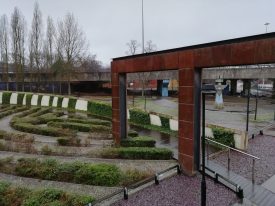 The site of Hobb's Hole.
Image courtesy of Gary Stocker 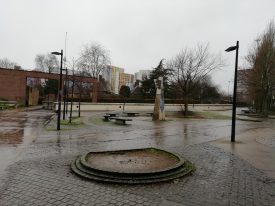 The site of Hobb's Hole.
Image courtesy of Gary Stocker

Where Millenium Square is now in Coventry, used to be a lake. It was fed by the Sherbourne and Radford Brook. This reduced down over the years and became St Osburg’s Pool and later the Mill Dam, as it fed the nearby priory water wheel. The only memory of it now is the name of the nearby bus station, Pool Meadow.

The pool was haunted by various drowning victims from over the years. Where one side of the pool was, was where later the Smithfield Hotel used to stand, which was said to be haunted by an actor. When I was at polytechnic in Coventry, we used to frequent that quite a lot. It was a Bass house and had a bar with a lot of pool tables and black and white images of various film stars around the wall. There was also a jukebox. Students used to live in some of the rooms upstairs.

An ash tree called, “Old Nick’s Tree” used to stand nearby. It is said that some people in a nearby grammar school conjured him up one night, using incantations and markings on the floor. However as soon as he was conjured up, he jumped through the window and landed in the ash tree in question. The branches sagged with his weight and groaned horribly. So thereafter, on wintry nights, it groaned horribly unlike any other tree.

Almost literally a stone’s throw away, a few hundred yards from Coventry city centre used to be a water well called Hobb’s Hole (or Hob’s Hole). The users of which used to elect their own mayor annually. The ceremony of which culminated in him being carried shoulder high and dunked in either the hole or the nearby river, which is now culverted underground. This carried on until sometime in the nineteenth century. The well is now gone. The site is right by a flyover. The site itself is now a Garden of International Friendship.

Rhyme about the Courtaulds chimney

The Courtaulds factory in Coventry was built in the 1920s. One of its famous features was the 200 foot tall chimney. A rhyme from about that era, about its chimney, went:

Courtaulds built a chimney, It wasn’t built for smoke. It takes the stink from Lockhurst Lane, And dumps it down in Stoke.

email
More from Coventry
More from Folklore and Myth