You are here: Home>Locations>Warwick>A Tram Crashes Into the Castle Arms, Warwick

A Tram Crashes Into the Castle Arms, Warwick 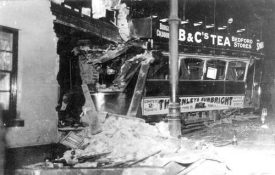 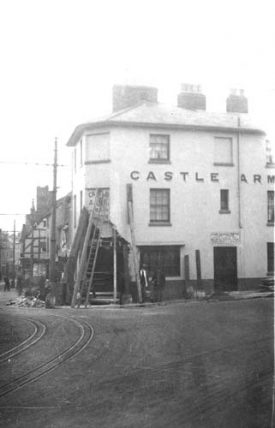 The Castle Arms at the corner of Smith Street and Castle Hill which was damaged by a run-away tram, Warwick. 1916
Warwickshire County Record Office reference PH 352/187/172

On the evening of January 3rd 1916, a curious accident happened at the Castle Arms pub in Warwick. As happened on any night, Nora Phipps was serving behind the bar whilst the locals enjoyed a pint or two. Just after 9:00pm their peace and quiet was disturbed as a tram smashed through the wall. Carnage was everywhere, as pictures, chairs, and china went flying. So too did Mrs. Smith the landlord’s wife, who was knocked over and fortunate to escape serious injury. It was also good fortune that a number of men had but recently moved their position, away from the wall where the tram entered the bar with violent force.

Poor Miss Phipps suffered more than most. The tram overturned the counter and with it, buried Miss Phipps beneath it. Lucky as it was for her to escape with some torn clothes and only injuries rather than anything worse, it took a Mr. Bond some time to help her escape from beneath the counter and the rubble.

The crash happened because the conductor, a Miss Haskins, had thought she had heard the bell that was rung by the driver to tell her to release the brake. Unfortunately this bell had not been rung, and the driver was not on the tram. This meant that once the brake was off the tram gathered speed down High Street and Jury Street with Miss Haskins unable to bring it to a standstill. Reaching the bend in the line round the East Gate, the tram’s speed was such it left the rails and found itself hurtling towards the Castle Arms.

Even though the damage extended to the upstairs bedroom, with furniture falling out into the street, the clock in the bar room kept ticking, as though nothing had happened. It is fortunate that the tram did not overturn on impact, so although the three passengers on the tram also suffered injuries, the consequences could have been much worse.

For a contemporary report of the incident, see the Warwick Advertiser of January 8th 1916.