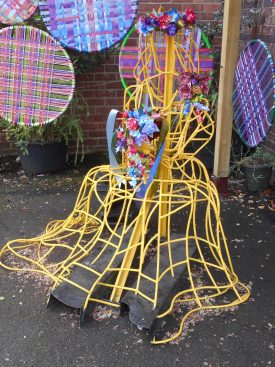 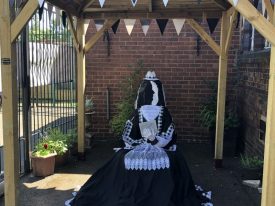 The George Eliot sculpture as it is in the Chilvers Coton Heritage Centre garden. 2019
Image courtesy of Joanna Lole

The sculpture was created for floral displays that happened around the town in the latter half of the 20th century, I remember it being outside of the railway station and outside the council offices. I think it was even placed on a roundabout or two throughout it previous life times. It always looked rather magnificent and represented our pride of George Eliot well.

I think it was always quite a mission to manage though. The maintenance of the frame, as we have found, is often not simple, and I imagine every winter it would have to be cleaned, painted and refreshed for the next year. So it ended up being put away in a storage facility and forgotten about, unfortunately. No one really knew where it had ended up until it was discovered again in the facility looking a little bit worse for wear.

Bringing the sculpture back to life

The council were more than happy for us to take it and actually use it. We brought it over to here, and we knew it was going to need a fair bit of work before it was going to be usable again. Our first obstacle was trying to figure out how to get it to stop rusting. I went through lots of different options like getting it sandblasted, or trying to get it plastic dipped; both of which options quickly become expensive and unattainable. Finally I was saved by John who volunteered Rob, as the kind of odd job man of the heritage centre, to help me put it back to use again. He suggested we give it a hosing and then use Hammerite to paint then frame and seal it. I originally wanted to paint it orange, but we could only find a yellow and neither of us were confident to paint mix. I left the actually painting to Rob, but it was rather an awkward job and I don’t think he was thanking me for it!

Once Rob had painted the frame there just came the decision of what we were actually going to do with it. We knew it could be housed outside because of course it was built for that, but as for what would go on it or around it we looking at starting from scratch. Eventually we started working with the very knowledgeable lady who runs the InStitches group here in Nuneaton. She and the group worked together to create a dress which could humanise the sculpture and make her more recognisable as George Eliot.

Historic patterns in a modern setting

They used a lot of historic patterns of Victorian dresses to create a silhouette which could be dressed around the frame. Here we ran into the first problem which is that the frame is only vaguely human shaped, so using dress patterns for women who had corsets creating 22 inch waists was not going to work. There was also the secondary problem that any material would have to be hard wearing if it was going to be outside for quite a lot of the year. Eventually we found material that would last, and the patterns were altered to accommodate the wiggly shape of the frame.

To finish the sculpture off the group designed a black and white side profile, which is quite Picasso-esque when looking at it. I thought it was quite striking and an interesting talking point. They also designed a black snood for her hair, as it was going to be hard to make anything so delicate that it could represent hair, which could also withstand the elements. Men in Sheds, who meet at Chilvers Coton, made us a gazebo to provide a bit more shelter for the sculpture and the InStitches group also created some bunting for us explaining who she was and how she’d come to be in our care. We had a launch to celebrate her and I’m very proud of the work we did.