You are here: Home>Locations>Coventry>Coventry and Rugby's Memorials to World War One: Tanks for the Memories

Coventry and Rugby's Memorials to World War One: Tanks for the Memories 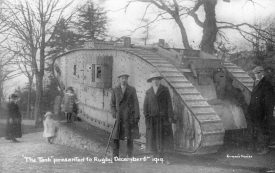 There aren’t many places you can see a World War One tank in the centre of a town. Indeed, it appears that Ashford in Kent is the only place you can. That tank is now officially designated as a war memorial, which perhaps shows its unique place as a relic of the past. After the First World War, however, it was far from alone, as immediately after the war 264 towns and cities received tanks to display. Two such places were Coventry and Rugby.

These tanks were a thank you, or reward from the government for the respective towns’ efforts in raising money for the war effort. Although an ubiquitous symbol of war in the present day, in 1917 and 1918 the tank was a new weapon, capturing the imagination of the public. As such, a fund raising campaign that came to be known as ‘Tank Banks’ saw six tanks travel the country to sell war bonds. Rugby had raised nearly £800,000, a more than credible effort, whilst Coventry raised £1.37 million. Clearly, these are substantial amounts for 1918 – we’re talking 10s of millions of pounds if we considered the equivalent in the present day. Clearly, using the tank to raise money fired the public’s imagination.

Whether the enthusiasm for the tank was maintained after the war had ended is arguable. Although Lord Denbigh’s speech on accepting the tank was enthusiastic, he felt obliged to mention those who objected to the presentation of the tanks – that they were unsightly, they were now scrap, and that they were a relic of war, with the associations of violence and death that came with them. Although Lord Denbigh dismissed such views out of hand, the very fact he felt the need to raise them at all suggested that this viewpoint was a vocal one.

Indeed, Coventry’s presentation was also blighted by debate and discussion as to whether the tank should be displayed on Greyfriars Green (in the centre of the city) or be shunted to the outskirts. This mirrored Rugby, who had also struggled to find a place to house their tank (Rugby Advertiser 25/11/1919). There was also a move to postpone the arrival of Coventry’s tank to a date other than May Day 1919, in order to minimise the chance of demonstrations.

Despite these fears, the Coventry Herald reported how “despite the inclement weather, there was a large attendance at Greyfriars Green for the ceremony” (13/2/1920), whilst a thousand people attended the Rugby ceremony, according to the Rugby Advertiser (9/12/1919). Apathy or resistance to the concept, then, had certainly not taken hold completely. Indeed, Coventry’s tank presentation was held up as an example by the Hull Daily Mail, who said how “Coventry has set the example to Hull… [the tank] has not been allowed to rust, but has been painted and placed in an enclosed green, and surrounded by flowers” (14/9/1920).

Apathy soon took hold however, and the tanks became neglected. Come World War Two, such tanks were used for their precious scrap metal (helping the war effort once more!) and were no longer street furniture. Ashford’s survives because it was converted to an electricity substation. Now it’s a tourist attraction, a site deemed fit to be conserved, the World War tank has come full circle. At least we still have the images of Rugby’s and Coventry’s to remember them by.