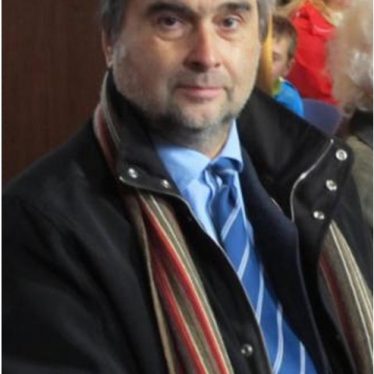 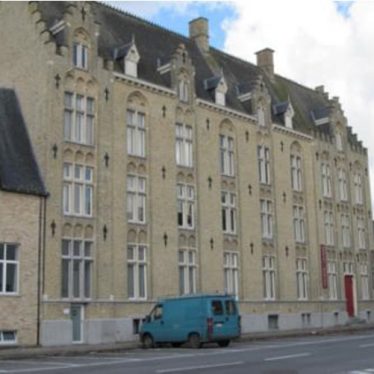 This is the school in Veurne which was the field hospital to which she delivered the wounded.
Picture (c) Johanna Moore 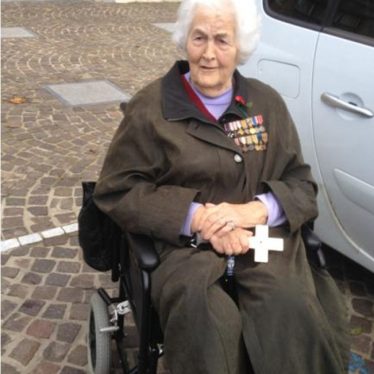 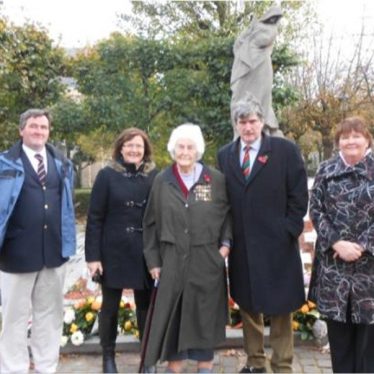 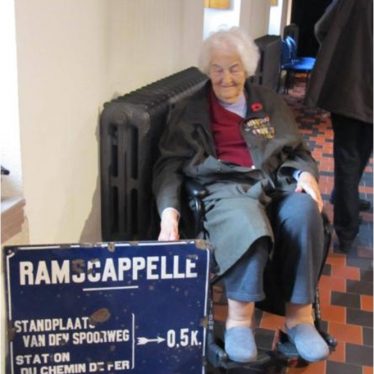 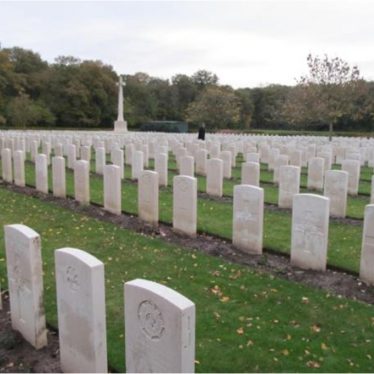 Lady Dorothie Feilding was daughter of Rudolph Feilding, ninth Earl of Denbigh, and the Countess of Denbigh, Cecilia Mary Feilding. In World War One she drove ambulances for the Munro Ambulance Corps, delivering patients to the field hospital in Veurne (referred to as Furnes in the many uncensored letters which Dorothie wrote home to her mother which are now in the Warwickshire County Record Office) from the front line at Nieuwpoort. She spent nearly three years in Flanders and was the first woman to be awarded the British Military Medal. She was also awarded the Croix de Guerre by the French and the Order of Leopold by the Belgians.

Johanna Moore, a grand daughter of Dorothie, wrote an account of a visit by descendents of Dorothie to Nieuwpoort in November 2013, where June Hyde, the last surviving child of Dorothie and Charles Moore, was guest of honour at the town’s Armistice Day commemorations.

Patrick Vanleene is the curator for the exhibition on Dorothie opening in April 2015. He is the most extraordinary historian – there is nothing about the war he doesn’t know and more importantly he cares about it so deeply. His affection for Dorothie is so evident we are all in no doubt that the exhibition will be an amazing record of her work and bravery. She is truly in safe hands with him. It is in deference to his lovely wife Marysa that I’ve used the Flemish version of the town names rather than the French ones that Dorothie would have used. She welcomed us into their home and fed us champagne so it’s the least we can do!

The school in Veurne was the field hospital to which she delivered the wounded. The courtyard where she would have unloaded the wounded looks the same as when she was there. Often there would be no more room in the hospital or the courtyard, so the wounded and dying would be lined up in the laneway too. Dorothie collected many wounded from Ramskapelle too. The most extraordinary thing is how close the front line was, at times just yards from where she was – she seemed to know no fear.

As a descendant of Dorothie, June was entitled to wear her medals on Armistice Day. It was quite surreal how much Dorothie seems to have meant to the town, how much they still appreciate her and her bravery. The organist had learnt two hymns in English – consulting You Tube for the pronunciations. The priest learned some English so he could say some words about her, and the lady making the speech at the war monument spoke quite beautifully and movingly about Dorothie. I think we all cried.

Dorothie managed, we’re not sure how, to bring home with her three local road signs from Nieuwpoort. They are all marked by bullets and shrapnel and have spent the past 100 years in a stable in the yard at Mooresfort. We all knew they were there but never really paid much attention to them. In fact one of them had even had cement mixed on it by someone! When Patrick and the council heard of their existence they were awe struck – nothing else at all remains in existence from Nieuwpoort pre 1918. Absolutely nothing remained of the town, not even a road sign. These three signs are unbelievably precious to them.

The War Memorial and Military Cemetery

A wreath laying took place after the mass, at the monument to the dead civilians of Nieuwpoort. A wreath (with the French colours on the ribbon) was sent by the French Embassy in honour of June’s visit, and in recognition of Dorothie’s work with the Fusiliers Marin. After the Armistice Day mass and reception in Nieuwpoort Patrick took us to Dozinghem Military Cemetery where Henry Feilding, Dorothie’s younger brother, is buried. Like all military cemeteries it is a terribly sad place but it is in the middle of a pretty wood which makes it more peaceful than some of them which are equally beautifully tended but are by a motorway or in a busy town. This really is a peaceful quiet place. He also showed us where he sustained his fatal wounds, now a ploughed field in the middle of the country with no indication of the unimaginable horror that went on there.