You are here: Home>Locations>Rugby>Royalty Comes to Rugby 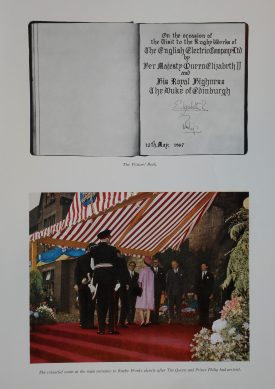 A brochure was produced to commemorate the visit. Also published was a booklet containing photographs and a list of the people presented to the Queen and Prince Philip.
Warwickshire County Record Office reference CR4031. by kind permission from Alstom Limited. 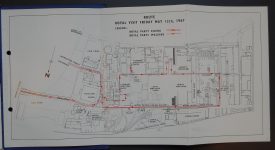 A layout drawing of the works with the royal route.
Warwickshire County Record Office reference CR4031. by kind permission from Alstom Limited.

Royal visits don’t just happen … this much is revealed in the Willans Works engineering archives held here at Warwickshire County Record Office. Within the collection, a variety of records show the sheer amount of planning and preparation that went into making sure the visit by the Queen and Prince Philip on the 12th May 1967 to the works in Rugby was a success.

There was extensive correspondence between English Electric (the then occupants of the site) and Buckingham Palace regarding arrangements for the visit. From pre-visit tours of the works, to a plan of the route (by foot and car) including information about press arrangements, nothing was left to chance. Within the company itself, there is evidence of the attention to detail that was dedicated to the visit. Internal correspondence covered topics such as: material to be displayed; the length of time allocated to the people speaking to the Queen and a description of what they intended to say to her; the script for the presentation; briefings; press previews; as well as information regarding the all-important final dress rehearsal.

Following a schedule that had been timed to the minute, the Queen and Prince Philip were given a tour of the works, where they met a variety of the staff from the site. They also signed the visitors’ book which is currently on display at the Record Office. To supplement the tour, an information booklet was produced about Willans and Robinson (who built the works in 1897) for the royal couple to take with them. This was not the only present they received; the firm was keen to showcase the skills of the company apprentices, who were given the honour of creating a miniature tool kit which was presented to the Queen (and for which there was a specific thank you in follow up letters from Buckingham Palace).

Following the visit, the staff must have been thrilled to receive letters from the Palace thanking Lord Nelson, who was the company chairman, and others for ‘an outstandingly successful visit’. Keen to mark the success of the visit, articles appeared in newspapers and in the company newsletter, including one written by the visit co-ordinator himself. This article is June’s Document of the Month for the Warwickshire County Record Office. Further articles can be found on their website.