You are here: Home>Locations>Claverdon>Cicely Lucas: Later Life in Claverdon 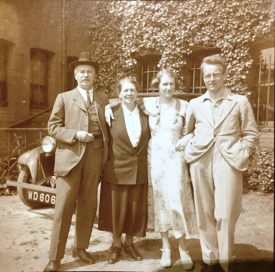 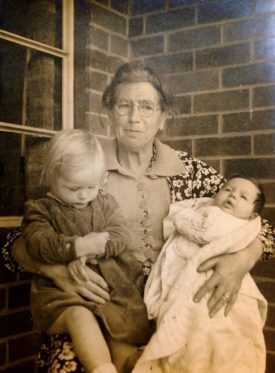 Cicely with grandchildren.
Image supplied by Christine Cluley, courtesy of the family of Cicely Lucas 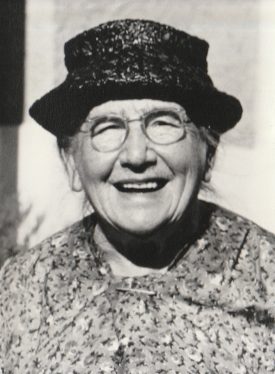 Cicely was now safe with her brother, but all her money was in France and she couldn’t access it. The answer was to find teaching work again and soon Cicely was employed teaching boys in Coventry. Before long, though, an even better opportunity arose and she was offered the post of Headmistress of Solihull Church of England School Girls’ Department, which was failing and in need of a complete overhaul. It was a challenge that suited Cicely and she improved both the school’s efficiency and its educational standards. She would stay in post until retirement came at the age of 60 and her pupils recalled her kindness, her generosity, and her sense of humour – but also her strictness and her determination that all should work hard.

Ernest came back to England a year later, and very soon he was appointed headmaster of Claverdon School. The family bought a bungalow in School Road, Claverdon, and lived there for many years. Cicely travelled into Solihull each day by railway, the train obligingly waiting for her arrival before it would depart. She was a familiar figure all the way from home to school and greeted everyone by name.

Cicely’s political beliefs, her desire to help people and to change the world, never weakened. She and Ernest were paid-up members of the local Socialist party although Cicely, never one to do things by halves, always claimed she was a communist. In 1938 she and Ernest joined a group of like-minded teachers and others travelling to Russia to observe the great successes of a communist country. Impressed by much that she saw, she wrote an account of the visit and Ernest took photographs of some of the sights.

The couple continued to live in Claverdon where Cicely, although officially retired, taught any child who required extra tuition. She wrote articles and reviews that appeared in the Warwick Advertiser and was press correspondent for the Claverdon cricket club. She continued to be a member of the Socialist Party and was also involved in local campaigns, such as saving Yarningale Common from prospective developers.

When Ernest died in 1951, Cicely decided to leave Claverdon and live with her married daughter in London. This proved unsatisfactory so she moved to a small hotel in Blackheath. Although her health was now failing, she could still engage the travelling salesmen in discussion, and she also found time to teach the young son of the hotel’s proprietor. But her sight and hearing worsened and one morning she stepped off the pavement without checking and was knocked down by a lorry. She died two weeks later.

Cicely Lucas was not an easy character. She could be argumentative and opinionated, abrasive at times with those in authority and was not a woman to suffer fools lightly. But she was shaped by hard times and driven by principles. She was remembered as a ‘character’ in Claverdon, where she lived for more than thirty years, and was recalled with great respect, even by those who might have disagreed with her opinions. But above all, she was remembered with real love and affection by many of her pupils, in Solihull and elsewhere, and it was on their lives that she had the greatest influence.