You are here: Home>Locations>Claverdon>Sir Francis Galton and Claverdon 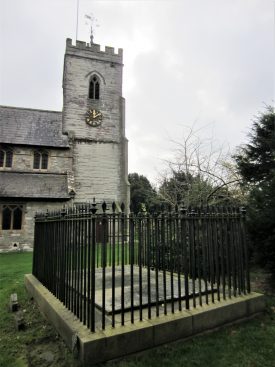 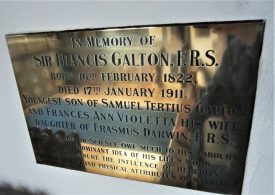 Francis Galton was born in Birmingham in 1822, son of Samuel Galton and Frances Darwin, and therefore a cousin of Charles Darwin. The Galton family had made their fortune in ironmongery and gun manufacture. Francis’s father was a founder member of the Birmingham Lunar Society (along with his grandfather, Erasmus Darwin). Francis proved a precocious child; he studied medicine in Birmingham and London and then mathematics at Cambridge. He suffered a nervous breakdown and didn’t complete his medical training. The death of his father left Francis with independent means; he married Louisa Butler in 1853 and they lived in London but had no children. Francis became a Fellow of the Royal Society, was knighted in 1909 and died in 1911.

As a young man, Francis was a keen traveller in the Middle East and Africa; he studied the tribes in what is now Namibia. He was awarded medals for his discoveries and wrote books about these expeditions: his ‘The Art of Travel’ was a best seller that is still in print today.

Francis made discoveries in many different areas of science, the result of his enquiring mind and passion for accurate measurement. In criminology he introduced a classification of fingerprints that is still in use today. In psychology his work led to psychometrics: measuring various types of human mental activity. In meteorology he was first to recognise anticyclones and devised air pressure charts to help in weather forecasting. In statistics, he introduced standard deviation, regression and correlation. In biology he investigated the effect of heredity and environment, making use of studies on twins and adopted children. He invented the terms ‘heredity’ and ‘eugenics’ and study of the latter led him into controversial territory (advocating incentives to some people to have more children). After his death eugenics took a much more sinister turn, leading eventually to horrors such as compulsory sterilisation, ethnic cleansing and the holocaust. Francis would no doubt have been deeply distressed at these developments.1

Francis’s parents moved from Birmingham to Leamington Spa in 1831, bought Malthouse Farm in Claverdon and built a house called ‘The Leys’ which his mother occupied after his father’s death. Thus it was Francis’s home as a young man but sadly it was demolished in the 1950s. Francis’s elder brother Darwin Galton bought several properties in Claverdon and became Lord of the Manor. ‘Ardencote’ was built in the 1860s on family land north of the village; this has since been enlarged, and is now the Ardencote Manor Hotel and Country Club. Sir Francis’s funeral was held in Claverdon and he is buried beside his parents in the churchyard; a brass plaque inside the church commemorates his achievements.2