You are here: Home>Locations>Ashow>Fantastic Beasts! An Ashow Schoolmaster's Unusual Penmanship 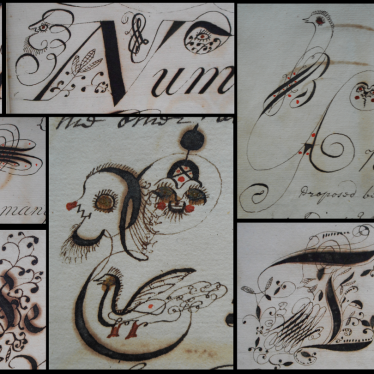 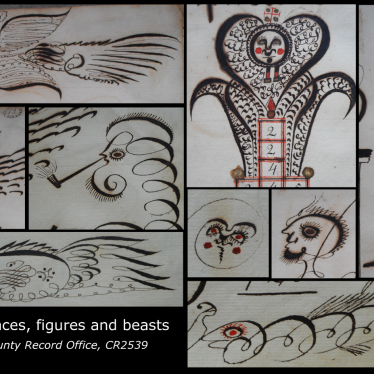 Some of the fantastical beasts and curious faces that can be found in Richard Lynes' book.
Warwickshire County Record Office reference CR2539 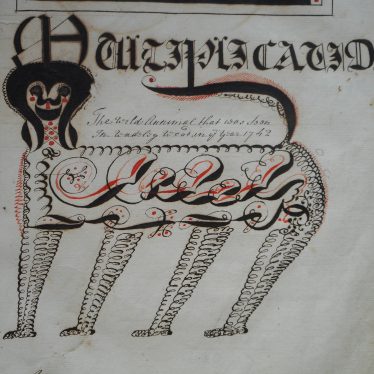 A flourishing ink drawing of a 'wild animal' found in the woods in 1742.
Warwickshire County Record Office reference CR2539 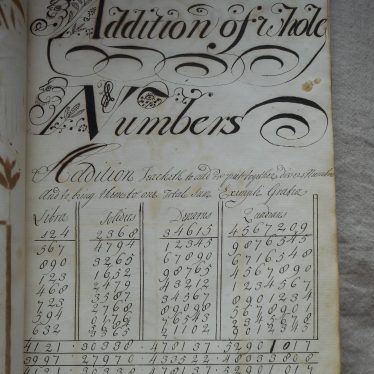 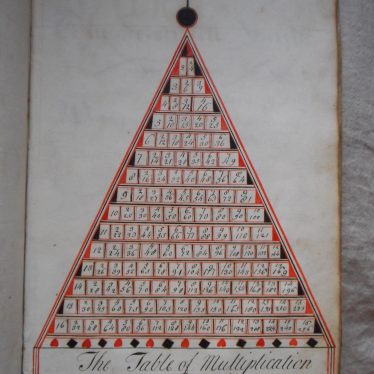 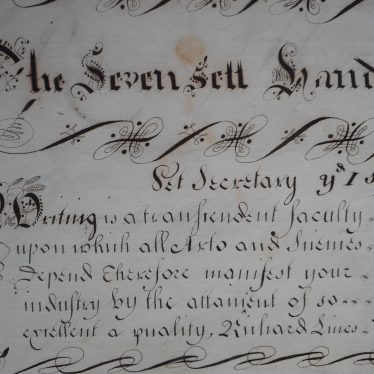 Sometimes, there are documents in Warwickshire County Record Office that are significant because they are particularly educational, or something of great significance in Warwickshire’s history. Often there are documents that are a little bit unusual or quirky. And sometimes, we at the record office come across something that is so visually spectacular that we just have to display it. This document, the book of Richard Lynes from ‘Ashen near Warwick’, is an example of the latter.

This particular document appears to be a book owned someone involved in education; whether student or teacher it is not clear (although likely the latter1). The pages are filled with instructions and examples of mathematics, tables of conversion and multiplication, and practice exercises. Towards the end of the volume we find demonstrations of different handwriting styles such as secretary hand and court hand.

This document is much more beautiful than it sounds. It is genuinely entrancing to browse through; each turn of the page brings a new delight, meticulously woven in black and red ink. There’s the chap smoking a pipe next to a peacock, the monarch seated grandly atop a multiplication table, and not least the remarkably creepy ‘wild animal that was seen in Wadeley Wood in the year 1742’. (It seems stories of big cats roaming the countryside aren’t limited to recent centuries.)

One of the flourishing illustrations, a man with a hairy belly and long dangly legs, is even honoured with a name and a poem: a slip of paper pinned over the image reads, ‘under this paper you may spie // a figure like Annotimye’. It seems to be a pun on the words annotation and anatomy.

It is clear that the author’s true passion was for precise and elaborate handwriting. The entire volume is a manifestation of his personal doctrine, expressed in secretary hand:

‘Writing is a transcendent faculty upon which all arts and sciences depend therefore manifest your industry by the attainment of so excellent a quality’.

Even in the mathematical pages, describing ‘the addition of whole numbers’ or listing rote exercises, we find an artistic flair. The capital ‘M’ of ‘Multiplication’ incorporates a small bearded man; the ‘E’ in ‘Example’ has two cheerful faces and what looks like a duck; the ‘W’ in ‘When’ takes up a quarter of a page with trailing leaves.

But who was Richard Lynes, with his penchant for penmanship and his expertise in arithmetic? Unfortunately, we know remarkably little about him. It has been suggested that he was a schoolmaster, although no schoolmaster’s certificate has been found for him. The catalogue entry at the record office mentions that there are marriage and burial entries for a Richard Lynes in Ashow, which may be what ‘Ashen’ refers to, whilst there are also records of a Richard Lynes working as an ‘overseer of the poor’ in Ashow in the 1760s.

This document is probably the most informative record of Richard Lynes that has survived. Even if it only represents the passions and interests of one man, it is evidence of a (literally) flourishing interest in penmanship and decorative script in 18th century Warwickshire.

This article is  April 2017’s Document of the Month for the Warwickshire County Record Office. Further articles can be found on their website.

1 See the paper catalogue for the record.

email
More from Ashow
More from Teachers and Staff