You are here: Home>Locations>Kenilworth>Kenilworth Tanneries 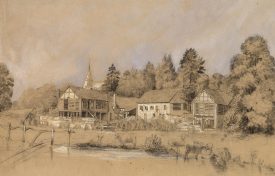 Back in the 19th and early 20th centuries, Kenilworth was the home of three tanneries.

The Warwick Road Tannery was on the current site of Talisman Square. In the late 19th century, the tannery operated as Thomas Day & Co, but was owned by Samuel Barrow (Barrow Road was named after him). It later changed to the Kenilworth Tannery Ltd, run by the much respected Charles (“Charlie”) Randall, who later owned the tannery and after whom Randall Road is named. Tannery Court and the doctors’ surgery at the top end of Bertie Road were built on a field owned by the tannery.

The second one was the Bridge Street Tannery, which can be seen in the accompanying picture, with cattle grazing at a pool. It stood opposite the entrance to the lime tree avenue leading to St. Nicholas’ Church (the car park entrance). The last operator (around 1840-50) was Samuel Burbery; the site was later occupied by the Clarkes, a firm of wheelwrights and a Mr. Smart, who ran a smithy there.

The third tannery was at the Windy Arbour end of Whitemoor Road, then known as Tanhouse Lane.

Avril Newey recalls the demise of the Bridge Street Tannery and the unforeseen beneficial result of that action:

I remember these buildings in my youth; they belonged then to wheelwright Jack (John) Clarke whose mother, always known as ‘Granny’ Clarke was a fierce and upright lady, a contemporary of my grandmother. “My grandparents lived in School Lane and one night in the late 50’s/ early 60s they went to bed and woke in the morning to find these buildings a smoking ruin. I believe they were pulled down for development by Smith’s the builders in Clinton Lane. It was the finest collection of old buildings that the town possessed. The formation of The Kenilworth Society by a group of young Coventry City Council architects designing the new Coventry but living in Kenilworth, was a direct result.

Anthrax in the house

Avril and her friends Rosemary Ann Richards and Heather Davies comprise Blackthorn Blossoms, who give fascinating talks about life in nineteenth and twentieth century Kenilworth, including the following story, told by Avril:

For some years my maternal grandfather was the Master Carpenter at the Warwick Road Tannery. One week-day dinnertime as my grandmother, my mother and her brothers were eating their dinner, my grandfather, unexpectedly, walked in. My grandmother, immediately concerned, said “What’s the matter?” He said nothing, but simply held out one arm towards her to show her four sores on the back of his wrist. Still saying nothing, he picked up the kettle, filled it, lit the gas and put it to boil. When it boiled, he picked it up, took it to the sink and slowly poured the boiling water over his wrist, whilst his children sat and watched. “My grandmother then took a white cloth and wrapped up his arm. He then went to see Dr. Asplen, who said, ‘Well, Holmes, you know that you’ve saved your life, don’t you?’ My grandfather did, for this was anthrax, the scourge of all those who worked in the cattle trade. Many before him had had to do the same, for it was then the only cure. I’m very glad to say that my grandfather lived till his 88th year, dying in Kenilworth as he had been born here.

Thanks to Avril Newey, Graham Gould and Robin Leach for contributing material used above.