You are here: Home>Locations>Sherbourne>Site of Fulbrook Castle 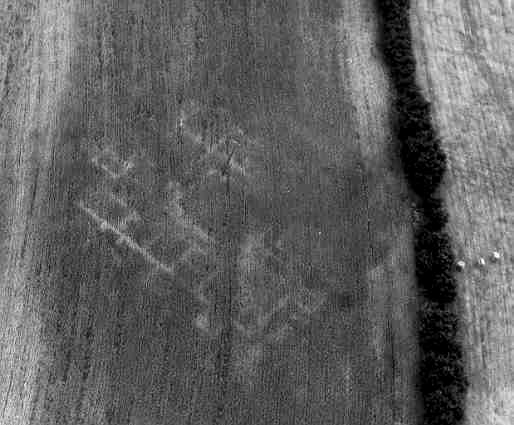 The site of Fulbrook Castle which was built in the 1400s, but is said to have been ruined by 1478. It is visible as a cropmark on aerial photographs and much brick and tile dating to the Medieval period has been found.

1 15th century castle of John, Duke of Bedford. There are no remains above ground, but excavations some years ago are said to have produced brick-lined foundations, and recent ploughing has produced large quantities of brick and fragments of glazed tile and pottery. Sir William Compton demolished the castle in the time of Henry VIII.
2 A ‘praty castle made of stone and brike’. Some of the castle was removed by Sir William Compton and, as some say, reused at Compton by Brailes.
3 By 1478 the castle was ruinous.
4 The whole field is strewn with bricks. About 40 years ago (c1790) stone steps leading down to a vault, or cellar, arched over with bricks, possibly once under a tower, were uncovered. An attempt was made to dig out the foundations of the building.
5 Ancient Monuments Record Form.
7 Aerial Photographs show a complex rectangular courtyard building on the site of the castle.
8 SAM Description.
9 Field Survey Form.
10 The cropmark site was examined. A very clear parch mark in which individual rooms and corridors placed around a central courtyard could be traced. Webster has suggested that this is a courtyard villa, but field investigation in 1985 produced evidence for a dense scatter of Medieval tile and brick mixed with small quantities of stone. The castle was situated on a hilltop with commanding views in all directions. There is no indication of any form of surrounding earthwork. The building was about 35m square. One wonders to what extent the castle was defensive; its plan is similar to phase 1 of Compton Wynyates.
11 Only a small proportion of the site has been excavated and, despite deep ploughing, substantial deposits will survive undisturbed. The sites importance is enhanced by documents which describe it as an early example of the use of brick.
12 The text of points <1, 2, 3, and 4>, and an extract from TBAS discussing the site.
13 Letter written to the DoE about a proposed field survey, see 9.