You are here: Home>Locations>Warwick>Warwick Castle Park 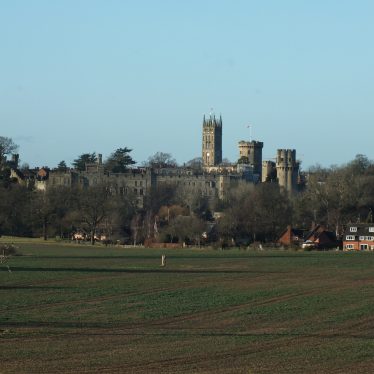 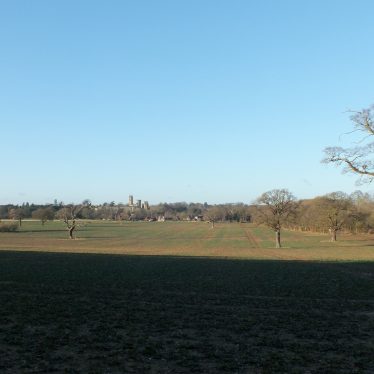 Warwick Castle Park. Documentary and evidence from excavation shows that the landscaped park, which surrounds Warwick Castle, dates to the Post Medieval and Imperial periods.Recommended for Review Register entry by Lovie.

1 Warwick Castle Park. An 18th century park and river landscape around the Medieval castle, c.320 ha. The park extends for c75 ha on the N side of the River Avon, mainly to the W and SW, and for c255 ha on the S side, stretching 2.2 km S of the Castle. Capability Brown was called in by Francis Lord Brooke in 1749, and his work of landscaping continued until at least 1761. Though Brown’s plantings have been thickened and extended, his essential plan remains. In 1869 Robert Marnock designed a remarkable work of formal bedding, the five-sided parterre garden in front of the Orangery. This has been maintained virtually unchanged since it was laid out.
The northern area of the Park, Temple Fields, had been granted to the Knight Templars as a manor by the 12th century. In the early 17th century the area of Lodge Wood, including the Warren, were bought up by John Spier. By the end of the 17th century the central part including the Warren and Temple Fields was in one ownership, the Greville family, and a system of avenues was laid out through this land, taking the Castle Mount, which was the centrepiece in the Castle gardens, as the focus for the avenues in the park. In 1743 the Castle Park was created in order to replace Wedgnock Park as the deer park for the Brooke estate. The aim was to create a park for pleasure and profit, based on contemporary aesthetic principles. The relationship with the castle was strengthened by removal of field boundaries, and the creation of drives in order to enjoy the Park. Views were introduced by means of planting.
2 Plans contained in Historic Landscape Study of Warwick Castle Park.
3 Archaeological Observation of the construction of a new path south of the Castle mound over the site of the backfilled Medieval ditch, revealed made up ground of propable 18th century date. Some Post Medieval finds.
4 Finds made by metall detectors in 1995: three tokens of the 1650s.
5 Twelve post medieval buckles, a key or clock winder and four crotal bells found in Castle Park between 1993 and 1995. No individual grid references. Method of recovery unrecorded.
6 Two post medieval coins found. The grid reference given was SP288643. Method of recovery unrecorded.
7 Map regression of Foxes Study to show its development from 1610 to the present day.
8 Lovie’s report notes parkland with boundary planting, clumps, spinneys, Lodge Wood with walkds and carriage route around park. 17th century formal avenues by Brown; outline of Brown’s work remains at time of Lovie’s report (1996/7).
Lovie comments that parkland survives well although mostly used for agricultural purposes at time of his report.
9 Portable Antiquities Scheme find provenance information:
Date found: 1998-01-01T00:00:00Z
Date found (2): 1999-01-01T00:00:00Z
Date found: 1999-07-31T23:00:00Z
Methods of discovery: Metal detector