You are here: Home>Locations>Kenilworth>Medieval Dam at Kenilworth Castle 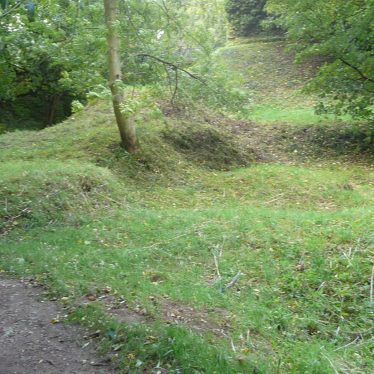 Mound as you approach the dam from Finham Brook. 2017.
Image courtesy of William Arnold 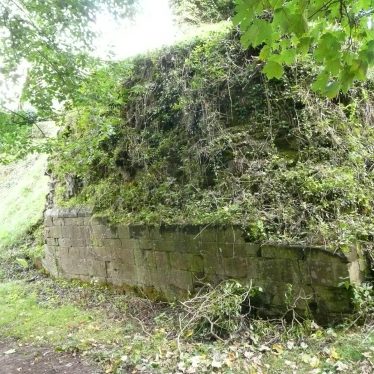 Further along revetment on north side of run off from dam. 2017.
Image courtesy of William Arnold 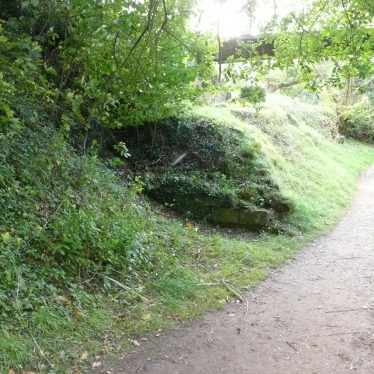 Stone work on west side of run off from dam, nearly underneath modern bridge.
Image courtesy of William Arnold 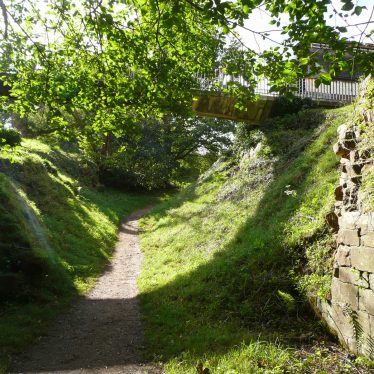 The site of a dam which was created during the Medieval period to create the water defences at Kenilworth castle known as the Mere, which no longer exists. The earthwork bank is still visible and is situated to the south, west and north of the castle.

1 A number of important earthworks exist outside the castle. Running in a SE direction for a length of about 137m is an artificial bank thrown across the valley from Mortimer’s Tower to the Floodgate Tower. It is about 16.4m wide and in part 6.1m high; this was constructed for the purpose of damming up the water of streams and pools and creating water defences to the castle on the S, W and N (PRN 5380). At the SE end of the great dam was a ditch, 17m wide and 6.1m deep, which served as an overflow for the waters of the lake. Portions of the stonework of a sluice survive. This sluice controlled the amount of water in the moat around the castle.
2 Previously Scheduled as Warwickshire Monument No 1.
3 Scheduling information.
4 Revised Scheduling information. Massive dam running SE from S side of Outer Court for apx 150m, built to retain water in mere. In 14th and 15th century was further strengthened and fortified, and was again improved for tilting in 16th century. It was deliberately breached in the aftermath of the Civil War. Fragments of Medieval masonry are still visible. As well as the dam itself a 10m wide sample section of the mere floor adjacent to it is Scheduled.
5 Arch Obs took place to assist with the proposals for a flood alleviation scheme. Test pits revealed alluvial deposits, including undated waterlogged deposits. There is considerable potential for important medieval waterlogged remains to survive adjacent to the south east end of the dam.
6 Arch survey – topographical/resistivity & radar – undertaken in asssociation with proposals for a flood alleviation scheme to place sluices across the outlet of the Finham Brook from the causeway and create an overflow at its southern end making use of an extant historic channel. The geophysical work identified the line of the channnel from the mere to the ponds and showed a bank on either side of the channel together with revetment features on the southern buried side. The topographical survey located several features including a platform surrounding the ponds, banks, masonry walls, quarry pits and rectilinear earthworks and a mound that may be structural remains.
7 Included in a resource assessment of the Mere and associated features.
8 Excavtion in advance of a new entrance building uncovered evidence of dam construction layers dating to the 12th/early 13th century. The layers appeared to pre-date the adjacent standing walls of the Gallery Tower and the Tiltyard, and were topped by a rubble surface which may have formed a strand for boats used on the mere. The remains survive at a depth of only 0.15 – 0.20m below the former ground surface over the whole of the excavated area, so that any interference below this level would disturb/destroy archaeological material.
9 Further report to 7.
10 Evidence of the make-up deposits for the dam and shallow foundations for the east wall of the Tiltyard were recorded during archaeological recording of disturbance caused by a fallen tree. Two phases of wall foundations were recorded for the east wall cut into the dam make up – the earlier foundation which was possibly medieval or 16th- century was fairly insubstantial; the later contained resused masonry, may have been late 16th-century in date although it had probably been rebuilt during consolidation work in the 1960s.