You are here: Home>Locations>Brandon>Brandon Castle 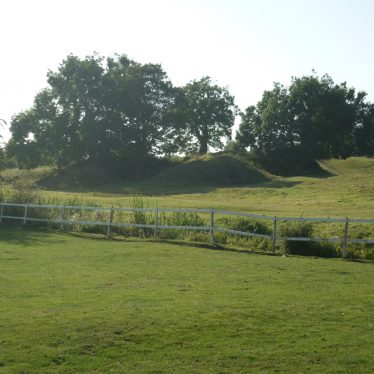 The remains of Brandon Castle, 2019
Image courtesy of William Arnold 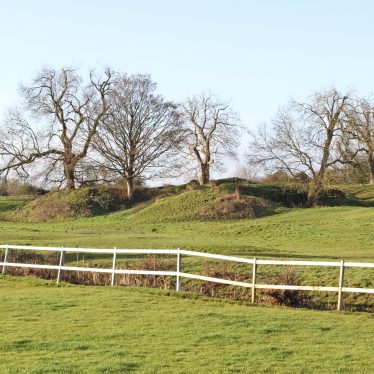 Brandon Castle, the site of a Medieval castle, with associated castle keep and moat complex. Documentary evidence exists for some of its history, and some of the earthworks have been patially excavated. The castle is situated 300m south of Brandon.

1 Very extensive earthworks marking the site of an important Medieval castle which formerly stood here. Defences appear to have consisted mainly of broad moats and sheets of water dammed by artificial banks and fed by sluices from the Avon. Earthworks cover 1.8 or 2.1 ha. The central moated mound, upon which the castle itself stood, is an almost square plateau which contains 0.4 ha; it has irregular additions and another small square on the E side; only fragments of walls of masonry now survive, and Dugdale wrote of it as ‘moats and heaps of rubbish’.
2 Built in the 12th century and long the seat of the Verdon family; it was garrisoned in 1195. It is said to have been ‘pulled down’ by the baronial troops from Kenilworth Castle in 1265 because John de Verdon was an active supporter of the king. In 1279 a castle and a park are recorded and it was still used as a residence in 1309, but how much later it continued to function is uncertain.
3 Earthworks consisting of three moated enclosures, presumably always more or less filled with water. Traces of the channels bringing water to the castle survive. Waterworks were probably strengthened in 1226 by Nicholas de Verdon. In 1947 an excavation located a rectangular keep, probably of 13th century date. Excavation in the E moat failed to locate 12th century material, but quantities of domestic material including a coin of Stephen were found. There may have been timber buildings here. A concentration of green-glazed ridge tiles and roofing slates in the W enclosure suggest a building ‘of some importance though small’. This could have been erected after destruction of the keep. The exact nature of the 12th century castle is uncertain. Excavation in the E and W enclosure produced pottery. Arrowheads and other iron objects were also found.
4 Scheduled as Warwickshire Monument No 55.
5 In the court to the W of the keep foundations of a minor building can be traced.
8 The Edwards archive is lodged with the Field Archaeology Section of Coventry Museum. Some of the finds may also be there.
9 Brandon Castle survives well and is unencumbered by modern development. Excavation has shown that the tower keep and its wards retain important information concerning the construction of the castle and related activities. The partly watterlogged deposits are potentially important as sources of information.
10 Mention in MSRG.
11 A 3m wide curvilinear ditch with banks on either side extending from the moat on the castles northern side to the road was mapped as part of the English Heritage National Mapping Project. A rectangular bank which appears to be the remains of a building apparent in the western bailey of the castle was also mapped. These features do not appear on the current mapping for the site. Monument boundary extended.