You are here: Home>Locations>Kenilworth>Kenilworth Castle: Phase 3 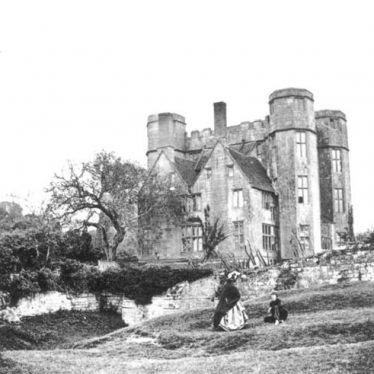 Phase three of the building of Kenilworth castle included the Great Hall with cellars below, the 'Strong Tower' which housed the treasury, and the 'Saintlow Tower'. This phase of building began in about 1391 and continued into the 1570s.

1 Under the wealthy and ostentatious John of Gaunt the castle was first repaired and then, from 1391 onwards, converted from a feudal stronghold into a palace. To this period belongs the Great Hall, which occupies the W side of the inner court, with the Hall on the first floor and cellars below. To the N was the ‘Strong Tower’ which acted as a treasury and to the S the ‘Saintlow Tower’ which gave access to the state apartments in the S of the court. Further alterations were conducted in the 1570s and a new main gatehouse built at the NE corner of the outer court. The Leicester Building was also constructed at this time. There were various later alterations. In 1649 the castle was slighted.
2 An excavation was conducted across the inner and outer ditches and curtain wall of the outer court. This revealed the sequence of construction of these features.
4 Scheduled as Warwickshire Monument No 1.
5 Scheduling information.
6 Listed Building description.
7 Documentary survey includes pictoral sources.
8 Illustration.
9 Excavation revealed traces of defensive curtain. Inside the defences, complex stratigraphy of the medieval period was recorded in the kitchen range beside the Norman keep. 15th century pottery was recovered.
10 Re-Scheduled in 1996 as Monument No 21576.
11 Recording during unblocking of the 17th century fireplace in the Oak Bedroom at Kenilworth Castle Gatehouse revealed no early fittings. The sides of the fireplace were painted red and the back black during the latest phase of use as a full width fireplace. The fireplace was initially reduced in size presumably to take a coal grate, probably in the early 19th century, and then completely blocked during the 20th century.