You are here: Home>Locations>Barton-on-the-Heath>Barton House 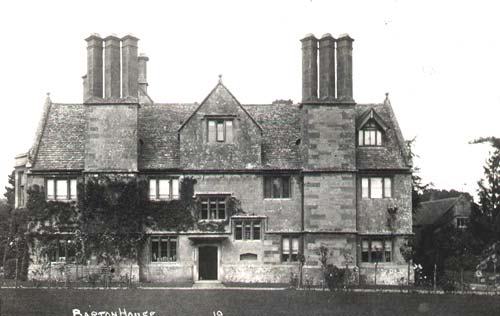 Barton House, a Post Medieval manor house with a brewhouse. It is situated 100m north of the Church of St Lawrence.

1 A large late 16th century house located to the north of the church. The building is of two storeys and attics in dressed Campden stone with projecting wings. There are large gabled dormers flush with lower walls. All the gables have moulded copings with small ball-finials at the apices. It was possibly remodelled by Indigo Jones, c.1612, perhaps Jones carried out some remodelling of the middle range of the H-plan – since this is not original- in the early 17th century. In the re-entrant angles of the wings are two, square, two storey porch towers with parapets surmounted by ball heads. The towers are connected by a central porch projection consisting of a big round arch rising through one and a half storeys under which is the Victorian hall window, a large mullion and transom.
In the south wall is an original arched and square-headed doorway to the stair hall and east of it, outside, is a recess that was used formerly for charity doles.
2 A brewhouse with 17th century detail is engaged on the north. The 17th century coach house is a listed building of stone with gabled ends. The eastgable has a sundial above a mullioned window. The 17th century stone entrance gate piers have moulded caps surmounted by ball heads. The gates are modern.
3 The five-vaulted cellar may be a remnant of the 1200 A.D. house on the same site. A good history of ownership and development is detailed in this document.