You are here: Home>Locations>Wellesbourne>Folly in Bath House Wood, Walton, Wellesbourne 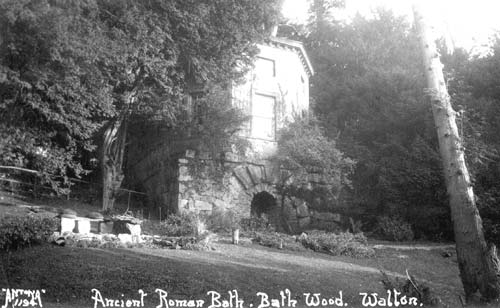 A folly dating to the Imperial period. It is situated in Bath House Wood. There were suggestions that it was a Roman bath house but recent investigation revealed that the whole building dates to the 18th or 19th century, though the gazebo did contain a spring or bath.

1 On Bath Hill is the Bath House, which gives birth to a copious spring issuing from a basin 31cm long, 20cm broad and 15cm deep. The lower part of the house is evidently ancient, but the upper part was erected about the start of the 19th century.
2 Bath House, alleged to be Roman by a writer to the Times, 28th August 1930. The upper part of the structure is 19th century and the lower, although being built of large semi-dressed blocks, seems to be the same. It seems that the whole building is of recent date.
3 The site was not located, but is reputed to be nothing more than a pile of rubble.
4 An 18th century folly or grotto with gazebo room above. Built solidly of ashlar on an arched rustic grotto containing a clear spring or bath.
5 History and restoration described.

email
More from Wellesbourne
More from Buildings and Structures (Parks and Gardens)
More from Follies and Monuments
More from Monuments, Statues, and Follies