You are here: Home>Locations>Welford-on-Avon>Church of St Peter, Welford on Avon 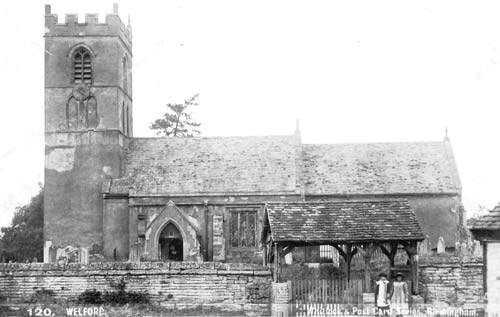 The Church of St Peter which was originally built during the Medieval period. Alterations were made to the church during the Post Medieval and Imperial periods. The church is situated on Church Lane, Welford-on-Avon.

1 Chancel with N vestry, nave, N and S aisles, S porch and W tower. Nave and narrow aisles of mid to late 12th century, also the lowest part of the tower, but cement facing obscures much of the evidence. Second stage of tower added early 13th century, and it was further heightened in the 15th century, probably to serve as a landmark and beacon for the ford. Chancel rebuilt and much enlarged c1330-40 and subsequently larger windows were inserted in the aisles, when probably also the S wall was buttressed and in part rebuilt. Building ‘restored’ in the 19th century by Sir G G Scott. Tower damaged by fire in 1884 and repaired the following year. 13th century font bowl; early 17th century pulpit. Lych gate probably 15th century. The church belonged to Deerhurst Priory and is recorded in 1291.
2 Plan of the church.
5 Noted by Ordnance Survey.
6 Photograph of the lych gate.