You are here: Home>Locations>Stratford-upon-Avon>Alveston Mill 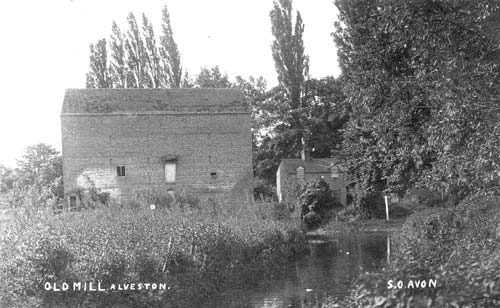 Alveston Mill, the site of a watermill for which there is documentary evidence from the early Medieval period. Derelict by 1886, it was demolished in the 1940s. Only a weir survives. The mill was 400m north east of the church.

2 A mill is known to have existed at Alveston since 966 and in the Domesday survey there were three mills. In 1240 there were two mills and a mill at Tiddington. All three mills were still in existence in 1650. Information on ownership exists for the 17th, 18th and 19th century. The mill was described as being in ruins in 1886 but was not demolished until the 1940s. An illustration of about 1900 shows the mill to have been a small building with an external undershot waterwheel. Nothing remains on the site except a weir across the head race.

Linkedin
More from Stratford-upon-Avon
More from Rivers and Streams
More from Windmills, Watermills and Cornmills