You are here: Home>Locations>Tredington>Tredington Mill 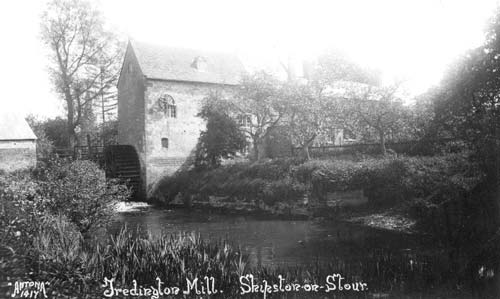 The site of Tredington Mill, a Medieval mill, known from documentary evidence. A later watermill was built on the site during the Imperial period. The site is located 100m south east of the church at Tredington.

1 There were three mills at Tredington in 1086 and at least one of them probably stood on this site. By 1649 only two mills are mentioned. Details of ownership exist for the mid 19th century onwards. The mill was worked until c1925. In 1940 the buildings were sold for conversion into several residences. All the machinery was removed, and the ironwork sold for scrap. The older part of the mill building dates from the 18th century and is a three storey brick structure which housed an undershot waterwheel and four pairs of stones. It was extended in the 19th century.
2 The observation of the foundations excavated for an extension at The Old Stables, Mill Lane, Tredington (SP 2600 4355), within the Medieval village, revealed no significant archaeological deposits.

Linkedin
More from Tredington
More from Mills
More from Windmills, Watermills and Cornmills