You are here: Home>Locations>Barford>Commemorating Joseph Arch 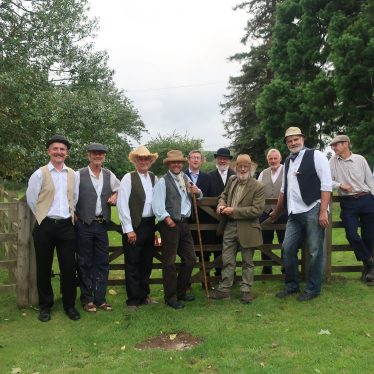 A group of extras in 1900s dress from film footage about Joseph Arch.
Image courtesy of Gary Stocker 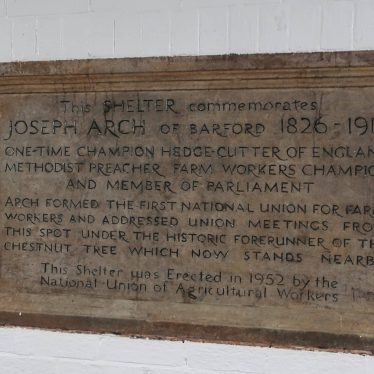 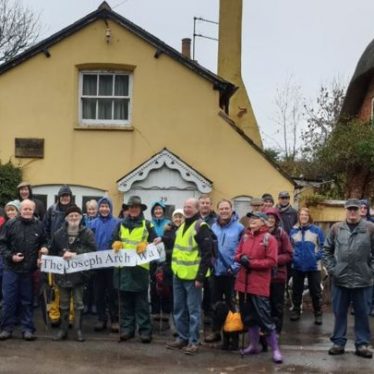 A gathering of people in front of Joseph Arch's former home in Barford, commemorating the 100th anniversary of his death.
Image courtesy of Gary Stocker. 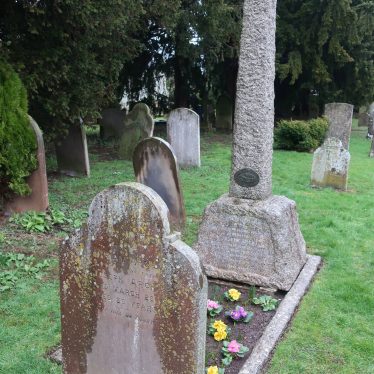 Photograph of the well-tended grave of Joseph Arch, in the churchyard of St Peter's, Barford.
Image courtesy of Gary Stocker 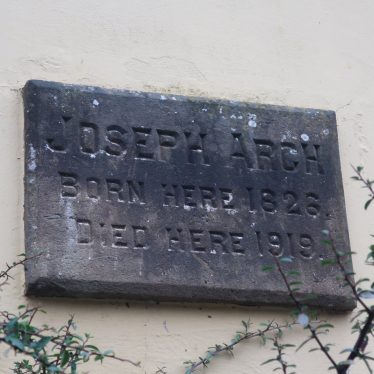 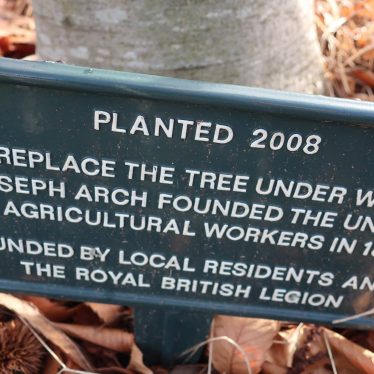 Plaque under tree planted in 2008 in Barford, to replace the tree under which Joseph Arch founded the National Union of Agricultural Workers.
Image courtesy of Gary Stocker

Called to a meeting at the Stag’s Head in Chestnut Square in Wellesbourne on a February night, he was expecting an attendance of around thirty. Instead there were in excess of two thousand agricultural labourers from the local area! So it was held under an oak tree across the road. They went on to form the Warwickshire, and later the National, Agricultural Workers’ Union, which did see some improvement in their wages. Joseph Arch went onto become an MP where he agitated for the extension of the voting franchise. He retired in 1900, returning to Barford, to the house which he was born in. He died there on 12th February 1919.

One hundred years on in Barford

So on the morning of Sunday 10th February 2019, a mini bus took some of the participants in the commemorations to Barford. The day started with a service at the graveside of Joseph Arch in St Peter’s churchyard. As well as the vicar there were other dignitaries, including the local MP. One of the older participants was saying how his grandfather could remember Joseph Arch, after he had retired, sitting outside his house on fine days.
After a group photograph outside Joseph Arch’s old house, it was over to the old scout hut to rendezvous before departing on the walk to Wellesbourne. The route being followed was the route which he would have taken on the night of that first meeting in Wellesbourne all those years ago. It went through Wasperton and Charlecote before getting to Chestnut Square in Wellesbourne. The way is actually known as the Joseph Arch Way. Some speeches were recited about him, including a local Shakespearean actor reciting Joseph Arch’s maiden speech in Parliament, followed by morris dancers then some singers.

In Wellesbourne itself there are some memorials about him. The original tree which the meeting was held under died in 1948 and there is a memorial plaque under the replacement tree.  There is also a Joseph Arch Road in the village. In 1952 the National Union of Agricultural Workers had a bus shelter erected near there with a commemorative stone inside and In Barford one of the pubs was renamed the Joseph Arch.
Later on in the year some local people were asked to take part as extras, playing agricultural labourers, in film footage about Joseph Arch. That was actually shot in the nearby village of Walton. That and some footage from the walk were included in an episode of the BBC TV programme, Countryfile.
Click here for the Stratford Herald article on the subject.
Click here for the BBC article on the subject.
The Day we Celebrated Joseph Arch - the extended version
A collection of video clips showing the highlights of the day when the hundredth year of Joseph Arch's death was commemorated.
Map marker in the right place? If not, please correct the map.
Locations
Barford (140)
Wellesbourne (139)
Subjects
Trade and Tradespeople (General) (90)
Trade Unions (8)
Author
Gary Stocker
Date