You are here: Home>Locations>Warwick>Warwickshire Natural History and Archaeological Society: Specimens and Labels 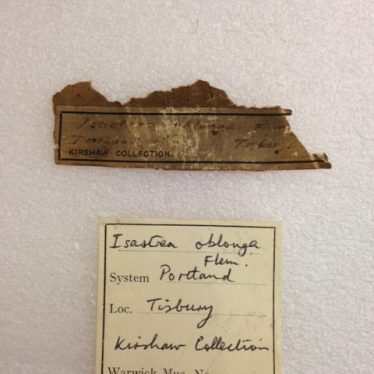 Two old labels, associated with a fossil coral from the Jurassic of Wiltshire. The label at the top bears the handwriting of Reverend Peter Brodie.
Image courtesy of Warwickshire Museum 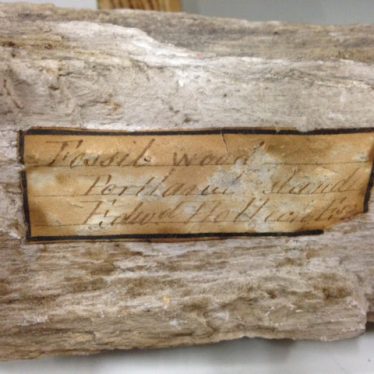 One of Reverend Peter Brodie's handwritten labels, glued to a specimen of fossil wood.
Image courtesy of Warwickshire Museum

As the first collections grew, the Warwickshire Natural History and Archaeological Society‘s curators labelled the growing number of specimens, establishing a very basic documentation system. In those days, all object labels were meticulously hand-written; a practice that has been sustained to the present day. In some cases the labels were placed alongside the specimens; in others they were physically glued to the surfaces of rocks, fossils and artefacts.

A link to the past

Today, these labels provide a valuable and fascinating link to the past. Some of the labels are signed, and so we can associate handwriting styles with particular 19th century curators. Many labels are those of the Reverend Peter Brodie, Honorary Curator of Geology for the society during the latter part of the 19th century.

Brodie’s handwriting, although carefully done, has little distinctive about the style, It has not been produced in copperplate or another overtly aesthetic style. It shows its function as a label, being produced for readability first.