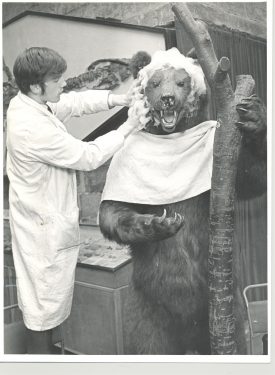 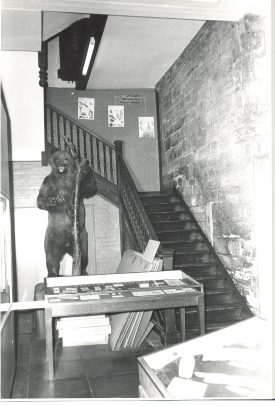 The Bear has lived in many places in Market Hall. here it is by the stairs to the first floor.
Photograph courtesy of Warwickshire Museum

This is a real stuffed bear that was probably shot in the Victorian period and was inherited from the Warwick Natural History and Archaeological Society in 1932. It has been called a ‘Russian Bear’ in some historical accounts, but also claimed to be an ‘American Grizzly Bear’ in others. Given that Alaska (now part of the United States) used to be part of the Russian Empire, both could be right.

Suffice to say, this Museum does not condone the hunting of bears, but having acquired such a magnificent specimen, we feel duty bound to look after it and display it! The Warwickshire Museum of the 21st Century is one of the most important organisations for promoting the conservation and appreciation of local wildlife, and any new taxidermy we commission typically features specimens that have died naturally or become unfortunate casualties of road traffic.

Bears in the wild

The bear featured is a Brown or Grizzly Bear Ursus arctos, the second largest of all the bears (a large male Brown Bear is only surpassed by a large male Polar Bear). It has a tremendous geographic range that until recently covered much of northern Europe, northern Asia and North America, with outlying populations in places like the Pyrenees, Balkans and Caucasus mountains. But today its populations are much reduced and highly fragmented. It is a sad fact that Brown Bears decline in most places where they come into regular contact with humans. The Brown Bear also used to occur in Britain, probably becoming extinct in the 10th century, though some historians claim a date as much as 500 years later. There are seven species of true bear in the world today, plus the Giant Panda, which is regarded variously as an aberrant bear or a giant relative of the Racoon.

From grizzly beast to cuddly toy

How did a dangerous beast become such a popular cuddly toy? Teddy bears actually have a fairly short history, appearing simultaneously in both the United States and Germany at the start of the 20th century. The American teddy bear concept seems to have originated as a cartoon that depicted President Theodore (‘Teddy’) Roosevelt refusing to shoot a baby bear. That in turn resulted in one well-known New York shop placing the model of a friendly looking ‘Teddy’s Bear’ in their window. This attracted so much attention that the first teddy bear manufacturing company was founded.

In Germany, the nephew of a stuffed toy manufacturer (Steiff), who often visited Stuttgart Zoo to sketch animals, also had the idea of creating models of bear cubs, but initially knew nothing of the American version. But at the Leipzig Toy Fair in 1903, an American toy buyer spotted the German Steiff bears and ordered a large number to import to the United States. Roosevelt used a teddy bear as his mascot in his re-election bid, and teddy bears started to feature in stories and songs like ‘The Teddy Bear’s Picnic”. Many companies on both sides of the Atlantic were soon making the blessed toys. In Britain, the teddy bear movement received a further boost in the 1920s when A.A. Milne started to write the Winnie-the-Pooh books. These stories featured the author’s young son, Christopher Robin Milne, and his English-made Farnell teddy bear.