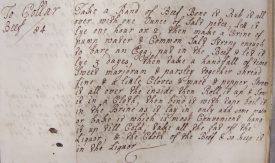 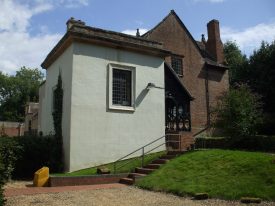 Mary Tilson lived in the early – mid 18th century. In 1732, she married Henry Wise, second surviving son and namesake of Royal gardener Henry Wise and his wife Patience. Henry Wise senior amassed a fortune during his lifetime and owned the Warwick Priory, among many other properties.

A book that survives today

Mary recorded recipes for preparing food, medicines and cosmetics in a book which has remained in the Wise (and later the Waller) family archive until the present day. There are two recipe books in the collection – the first1 dates from the early 18th century and contains accounts for one of Henry Wise senior’s properties in London, so this may have been owned by Mary’s mother-in-law, Patience, and then possibly passed on to her. The second book2 has Mary Wise’s name on the cover, so it seems likely that it was hers. Many different handwriting styles feature in the book, suggesting housekeepers, cooks and perhaps female relatives may have contributed over the years. The last recipes to have been included are dated after the death of Mary in 1760, so perhaps she herself passed the book on to another before she died.

The recipes themselves provide an insight into the lifestyle of the 18th century Wise family.

Recipes for making all kinds of desserts and cakes, like sugar biscuits, fruit creams, syllabubs, and fruit tarts. Sugar, though expensive at this time, features a lot, emphasizing the wealth of the Wise family. Fruit and vegetables are mentioned mainly as items to be preserved/pickled, for example pickled cucumber, or to be made into puddings or tarts.

Originally published as part of the Outside the Box project.