You are here: Home>Locations>Bishop's Tachbrook>A Survey of the Manor of Tachbrook

A Survey of the Manor of Tachbrook 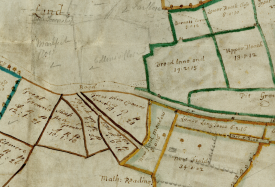 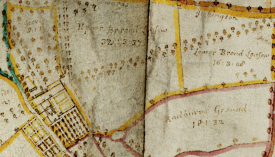 This substantial map1 indicates the lands owned by the Sir Edward Bagot (1674-1712) in the Manor of Tachbrook, located just south of Warwick. The ancient manor of Tachbrook was initially given to the Church of St Chad at Lichfield, before being given to the Bishop of Chester after the Norman conquest. Its subsequent ownerships under the Bishops of Coventry and Lichfield lent the village the name Bishop’s Tachbrook, despite being sold by the church during the reign of Henry VIII.

After the death of a later member of the Bagot family in 1798 the land was sold to George Greville, 2nd Earl of Warwick. As indicated on the map, much of Warwick Castle’s parkland was located in the vicinity, and would have been a prime target for expansion. This map, along with the land, became a part of the Greville collection in the closing years of the 18th century.

The map indicates the boundaries and leaseholders of the land, indicated presumably by written labels and coloured outlines. A table in the bottom left hand corner gives the measurements in ‘A…R…P’ (Acres…roods…poles/perch) and indicates that the land in consisted of over 2,341 acres in total.

Although hard to imagine today, these maps would have served as working documents, where alterations, additions and subtractions could be made with relative ease. The sale of Glebe Wood, indicated with several X’s, is deducted from the total acreage presumably after its sale. Several different hands, marked in pen and pencil, can be seen drawing new plots of land presumably devised by later estate managers.

Amongst the finer details of the map are wonderful visual descriptions of formal gardens and avenues of trees belonging to the manor house at the top centre of the document.