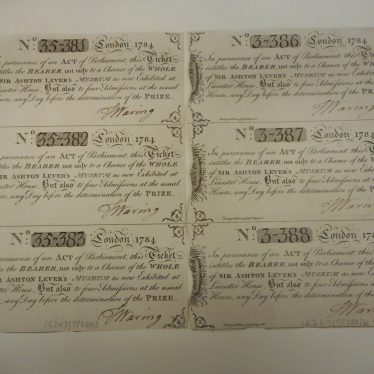 Possibly the last six of only seven tickets still in existence for the lottery to win the ‘first museum in the universe’!
Warwickshire County Record Office reference CR2017/TP280/3-4 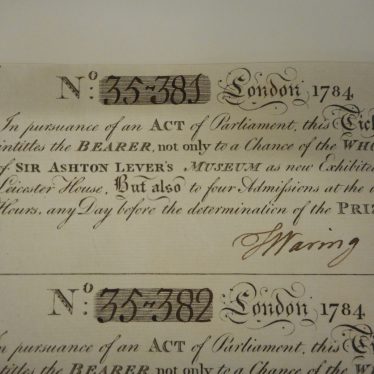 Signed by collection manager, Thomas Waring, the tickets not only offered the chance to win the museum, but also admission for four to its wonders.
Warwickshire County Record Office reference CR2017/TP280/3 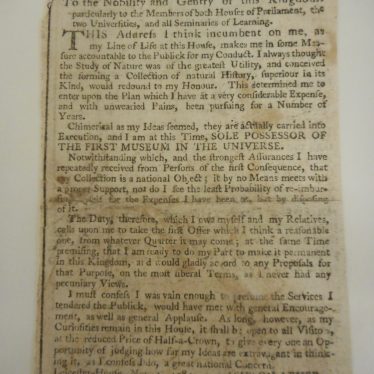 Unsustainable expenses and a lack of support has already forced Ashton Lever to consider how best to sell off the ‘first museum in the universe’ three years earlier.
Warwickshire County Record Office reference CR2017/TP280/2

All archive collections are unique and Warwickshire County Record Office holds many treasures, their value immeasurable because they are irreplaceable.  Printed items generally have little or no archival value, because many copies of the same item may exist, although sometimes the distinction is not as straightforward as archivists would like it to be.

A decline in numbers

In 1784 there were 36,000 copies of this particular item, but today the Feilding family of Newnham Paddox collection may contain six of only seven specimens of this printed ephemera known to survive.1  They are tickets for an exceptional lottery to win what its then owner, the naturalist Sir Ashton Lever, described as ‘the first museum in the universe’.2

The tickets are part of the papers of Sir Thomas Pennant, acclaimed naturalist, antiquarian and author of the earliest known inventory of paintings at Warwick Castle.  Although not a native of Warwickshire, when his grand-daughter married the 8th Earl of Denbigh his correspondence was destined to become part of the Feilding archive.  Pennant was a huge supporter of the Lever museum, also called the Holophusikon, testifying before Parliament to the importance of its natural history artefacts and that he had never seen anything ‘more rare, more curious and more instructive’, than the Lever collection.3

Sadly, the museum’s high running costs were unsustainable and not wanting the sell his valuable collection piecemeal, Lever conceived of a lottery to win the entire museum. Although expectations were high, only 8,000 tickets were sold and the eventual winner initially moved the collection to a cheaper location before finally selling the collection at auction in 1806.  Over 7,500 items were sold to museums and collectors around the world.

It is interesting to speculate on what Thomas Pennant might have done with the Holophusikon  if one of his six tickets had won him the prize!

This article was Document of the Month for the Warwickshire County Record Office in June 2018.  Further articles can be found on their website.