You are here: Home>Locations>Coventry>The Starley Family: Cycle Innovators in Coventry 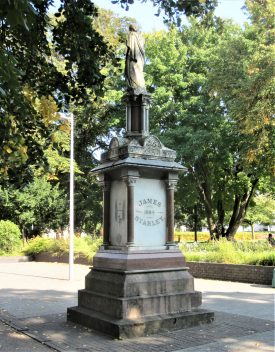 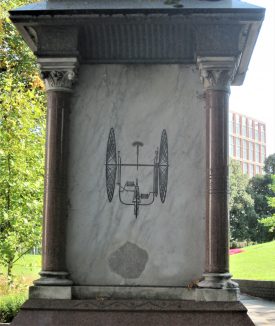 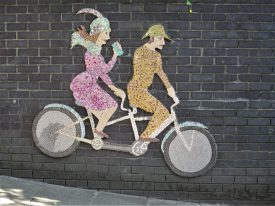 A 500-mile cycling and walking network is being set up in the West Midlands and named the ‘Starley network’. This prompted me to investigate further: there’s a Starley statue I pass regularly in Coventry, but why were they famous?

James was born in Sussex and proved an inventive lad; he ran away from the family farm to work in London where his skill at repairing watches and other items earned him work in the sewing machine business. He married Jane Todd and moved to Coventry in 1861 to set up the ‘Coventry Sewing Machine Company’ with Josiah Turner. They soon began making bicycles, including the French velocipede: a clumsy wooden affair. James founded his own business – the ‘Coventry Machinists Company’ – where he developed improvements to produce the ‘Ariel’: a much lighter, penny-farthing bicycle with wire spokes and better steering.

The firm produced  a series of tricycles in the 1870s including the ‘Coventry Lever Tricycle’ in 1876. James patented tangent spokes for bicycles and invented the revolutionary differential gear that forms an essential component in motor car steering to this day. He personally delivered a Starley Quadricycle to Queen Victoria on the Isle of Wight shortly before he died, at the age of 51. His family continued in the cycle business: nephew John Kemp and three sons James II, John Marshall and William. The Coventry Machinists Company became the Swift Cycle Company in 1896, followed by the Swift Motor Company in 1902.

James’ nephew John was born in London. He joined the family firm in Coventry and then set up his own firm ‘Starley & Sutton Co.’ that produced the ‘Rover Tricycle’ in 1883. His great contribution was the diamond-framed ‘Rover Safety Bicycle’ in 1885, whose design signaled the arrival of the modern bicycle as we know it. In 1888 the firm changed its name to ‘J.K. Starley & Co. Ltd’ and in 1896 became the ‘Rover Cycle Co. Ltd’.

After John’s death this firm started building motor-cycles and an early electric car: actually a tricycle with a battery-driven motor. It went on to produce the famous Rover motor-cars, and this business continued in Coventry until 1945 when production moved to Solihull. The Coventry Transport Museum has some early Starley machines in its collection.

The statue was erected in 1884 with ‘Fame’ on the top, a portrait of James and pictures of early Starley tricycles. Sadly Fame has lost her nose and part of an arm but the statue still stands on Warwick Row – appropriately next to a cycle lane, and close to the mosaic mural shown here.