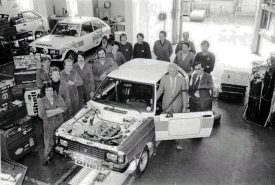 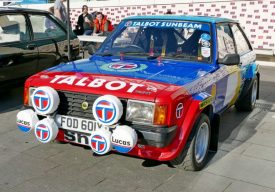 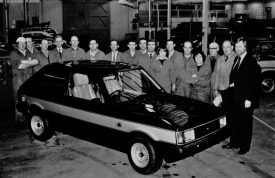 Local manufacturer the Rootes Group owned some of the outstanding names in British motor sport heritage, Sunbeam and Talbot in particular. Like most British manufactures Rootes and its successor, Chrysler UK, saw the benefit of motor sport competition in keeping the company’s stable of names in front of the car buying public. In the 1950s there was the rallying successes of the Sunbeam Talbot 90 and Alpine,1 while there was later success with the 1959-1968 Sunbeam Alpine, and Hillman Imp. But with all this club and national success, they were still lacking at world level.

A rally car to conquer the world

In its quest to develop a rally car to challenge Ford’s Escort, Des O’dell, Wynne Mitchell and the small team employed in Chrysler UK’s  Competition Department, followed the tried and tested formula and installed a relatively large engine in a compact, lightweight bodyshell to create the ‘Sunbeam Lotus’. Development had started in 1977 before Chrysler sold its European interests to Peugeot, and continued under the latter’s ownership as Peugeot revived the moribund Talbot brand for its UK-built models. A ‘homologation special’, around 150bhp was claimed in road trim with up to 240 horsepower available in Group 2 specification.

Prototypes first appeared in competition in 1978. Tony Pond scoring the first major success with second place in the Mille Pistes rally, a result he repeated in 1979. A more ambitious campaign was undertaken in 1980 when two cars were fielded for drivers Henri Toivonen and Guy Frequelin, the highlight of which was Toivonen’s victory in the RAC Rally. Both drivers were retained for 1981, their one outright win and five second places being good enough to earn Talbot the World Championship for Makes. Despite these successes Peugeot then scaled down the Sunbeam Lotus effort, preferring to concentrate on developing the new four-wheel drive Peugeot 205 Turbo 16. Only 2,308 Sunbeam Lotus models were made before production came to an end in 1981, of which 1,184 were right-hand drive.

The road car, available through Talbot dealers, was officially launched at the Geneva Motor Show in March 1979. More than just fast, they certainly looked the part as well. Initially, they were offered only in Embassy Black with silver stripes and sported a brace of Marchal spotlights and bespoke ‘double four-spoke’ cast alloy wheels.

For the 1981 model year a black and grey “Piccadilly” trim was introduced and these new Series 2 cars were further distinguished by larger headlamps, a new corporate grille, new door mirrors, a much-needed larger fuel tank and a small increase in power and torque figures. The following year, with a number of cars still in stock and sales slow, Moonstone Blue paintwork became the only available colour, although customers were offered a choice of silver or black stripes.

Even so, some cars remained unsold through the winter of 1982-1983, and a batch of 150 was reserved for Avon Coachworks of Warwick to produce a limited edition ‘Avon’ model. These were to be retrimmed internally, with a change of exterior colour scheme and the addition of original green & yellow Lotus badges on the flanks, plus each was to be registered within the series DDU 1Y to DDU 150Y, with a limited edition serial number corresponding to the registration. In total, though, only 56 cars were officially converted (plus a handful of cars returned from dealers for conversion), and some of these missed out on the DDU number plate.

The final batch of cars, including the balance of the 150 originally destined for Avon Coachworks, were sold through a single dealer in Nuneaton at reduced prices. Again, these cars were all registered in sequence bearing the marks DAC 2Y to DAC 141Y.

It should have been a roaring success, but the ongoing fuel crisis hit demand for all large-engined cars and, despite a projected production run of 4,100, time was called on the Sunbeam Lotus after 2,308 were made.

This is an edited and abridged version of an article originally published on the Car Scene International blog (where more pictures are available!). It is reproduced with the author’s permission.